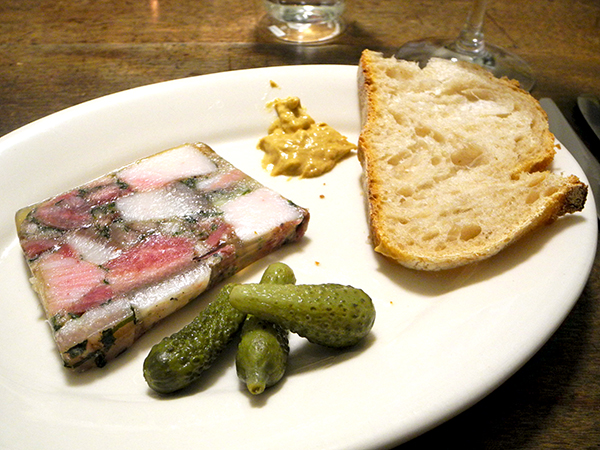 Something new. Unfortunately I can’t write that phrase as often as I would like to, but on a trip to Dickson’s Farmstand Meats last week I spotted a beautiful pâté de tète set in aspic, and asked Philip to vacuum pack two small slices in each of two packages (in order to be used in two meals).  The delicacy is known by many names, including ‘head cheese‘, but it was, I think, something new on this site, and delicious, whatever it might be called.

I’m now remembering how much my Father loved head cheese, which of course is not a cheese at all, and as kids we couldn’t get past the name. He also really loved Limburger cheese, which doesn’t have a name problem, but we all ran from the lunch table when he opened its package and exposed the pungent smell produced by the bacteria largely responsible for body odor, and smelly feet.

I just realized that Limburg is from the part of the Germanic world from which the Wagners originated; ah, the power of heritage!

When I thought about including this beautiful pâté as a first course in this meal, fortunately I already had on hand some cornichon, a bottle of good prepared French mustard, and a loaf of crusty bread.

No Limburger in site. 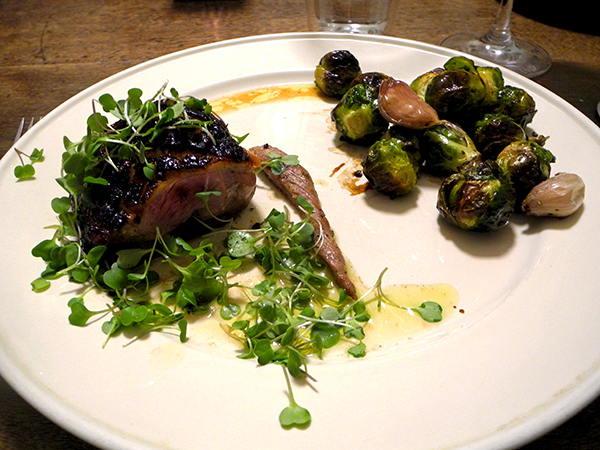 The main course included one of our favorite recipes, a simple sautéed duck breast, with a new finish. There were also some very-late-season Brussels sprouts from the Greenmarket, the secret for whose availability on one of the last days of January I was unable to learn that day.