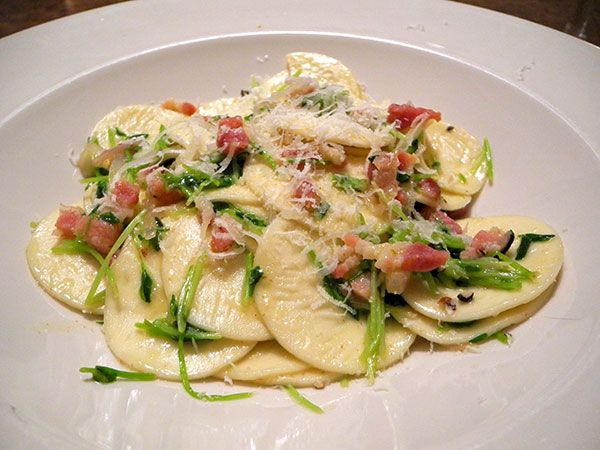 Note to self:  This entrée was a very special treat, and would be suitable for a gentle festive occasion.

This looks a bit like round ravioli, but it’s actually Croxetti, a very special (unfilled) pasta original to the Ligurian coast.  I have something of a modest passion for it, and I’ve accumulated over a dozen attractive recipes to satisfy it.  This is the first time I’ve had pea sprouts and Croxetti at the same time, so I came up with the idea of adding a bit of cured pork flavor to the mix.   Having gotten that far, I really didn’t have to look for more in the way of an organized recipe, but this turned out to be exactly what I wanted, so, voilà!

Part of my obsession with Croxetti may be it’s resemblance to the wafers distributed to the faithful in the Catholic Eucharist.  As a child, I really got off  on the Roman Church’s ritual (smells, bells, pretty vestments, grand architecture, Latin!) and I’ve always been a fan of bread, in almost any form.   Confession: when I was very young I tried to imitate the host which I found so delicious by simply undoing the leavening process which brought Wonder Bread to our table, by pressing the air out of a slice and drying it (it didn’t work, which means it may be all the more surprising that I left the Church half a century back).

Note:  Using the quantities indicated above meant, that, as usual when we have a pasta dinner, there would be enough left for another meal.  If the pasta is carefully stored and reheated within a few days (or not reheated, in some cases), perhaps with some fresh element added, the second time around is not necessarily going to be second-best, and it’s definitely a timesaver.