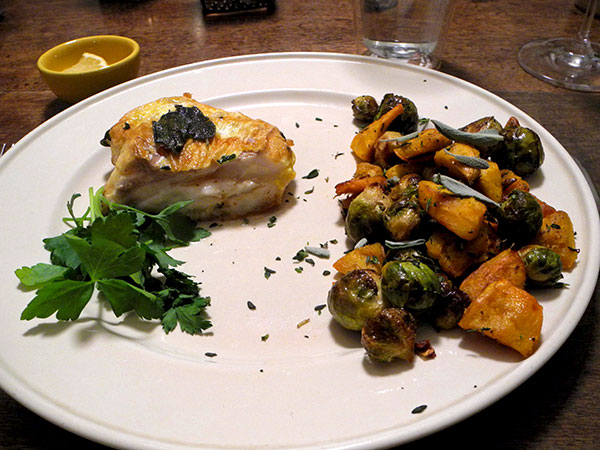 This is another meal which might have looked more at home last fall, rather than a mild day like this one, but because of the miracles of local suppliers, along with one beautiful thick section of hake, I happened to have some winter squash and Brussels sprouts which I had also picked up at the Greenmarket very recently, and I was anxious to use it before the evenings became really warm.

I think it’s amazing that, for the first time ever, we will probably be able to make it all the way through a New York City winter without ever having had an interruption in the supply of fresh local green vegetables of one kind or another.  As an example of what’s going on, today at the market, noting that the date was March 11, I picked up some collard greens, some more large leeks, and a bag of Long Island citrus fruit.  Yup, local citrus,to be specific, it was oranges and lemons, and there were two other possibilities available.