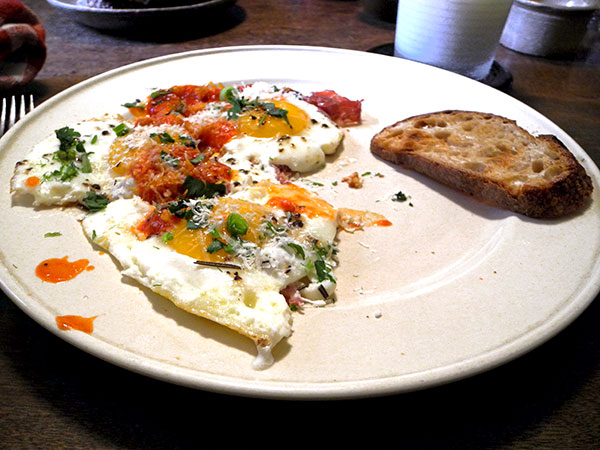 It was Sunday morning, or rather Sunday afternoon.  Something eggs seemed to be in order, but perhaps nothing really special, considering the hour.  It had to be tasty, but also practical, that is, I was thinking it would be good if I could include mostly ingredients ready to leave the larder.

It was also going to be easy, if not quite instant.

I started by buttering a large-ish enameled iron pan and placing in it a layer of a few ounces of thinly sliced Colameco’s capocolla from Whole Foods which I had almost forgotten was still in the refrigerator. I broke 6 eggs from Millport Dairy on top of the salume, fried them until the whites had not quite become solid, seasoned them and poured over them a bit of tomato sauce.  The sauce was composed as they cooked, and included sliced spring garlic, heated in olive oil, before tomato juices from the canned tomatoes used the night before were added, the sauce then reduced until slightly thickened.  There were various chopped herbs involved somewhere along the way, leftover from two meals of the day before.  I finished the eggs with a sprinkling of grated Parmesan cheese and served them with toast made from both a sourdough bâtard from She Wolf Bakery and a Rustic Classic loaf from Eataly.