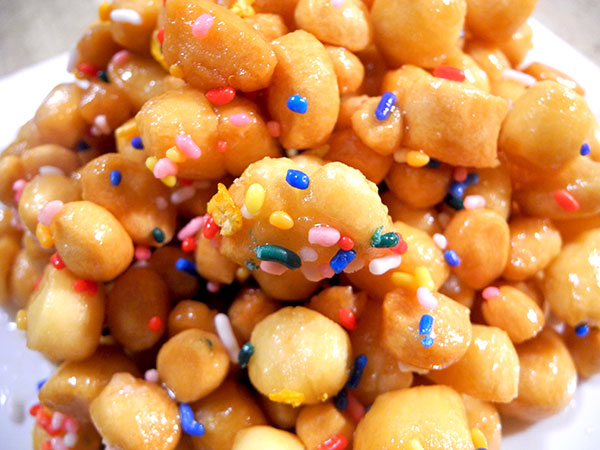 Struffoli.  For me it means an Italian Christmas, but it also means the memory of one Providence Christmas almost half a century ago, and the very generous love of a good friend.  It’s a small story, but my recent revisiting of handmade Struffoli at Buon Italia made me think of Bernie.

I had never cooked anything, anywhere, until the first week I had my own kitchen.  The year was 1964, I had rented a grand studio apartment on Benefit Street in Providence. It was my first year as a graduate student in history at Brown. My introduction to cooking was both forced and an assertion of independence.  I knew I wasn’t going to trudge up College Hill to the campus for all my meals, and that I couldn’t afford to eat out regularly.  Besides, having just returned from a year in Munich, where I had immersed myself in German Gasthaus cookery (including excellent venison dinners for the equivalent of $1.25!), I decided that I wasn’t willing to go back to school cafeteria fare.

Eventually I built up my confidence, thanks to some improvising in my simple, one-wall kitchen, and leaning on The Fannie Farmer Cookbook, and later supported by The Joy of Cooking and Mimi Sheraton’s wonderful, The German Cookbook.  Perhaps just as important, in 1967 I moved around the corner into a large, two-story home along with a magical new lover; the house on South Court Street had both a dedicated, real kitchen and a separate dining room, and I began to think I really could prepare at home the food that interested me most at the time.  When the holidays approached that year, and I realized that neither of us, like many of the people I had come to know and love in Rhode Island, would be going home, naturally I decided it was the perfect time to roast a suckling pig.

One of my best friends, Bernard Scola, (who was actually going to be home, in Providence, for an elaborate Christmas dinner with his Italian family) offered to arrange to get a pig for me from a local farmer his family knew.  I don’t even remember whether I was the one who ended up paying for it, but I do remember that when we realized it might be difficult for me to transport a freshly-slaughtered animal, even a small one, in my little gray 7-year-old Porsche (yeah, I was spoiled), Bernie offered me the use of the large trunk of his big brand-new Thunderbird Landau Sedan (for those who car, it was the rather elegant one with the ‘suicide doors’).

As it turned out, the ‘suckling’ pig handed over to us in the farmyard could better be described as a ‘porker’, and that meant that it would occupy a good part of the T-Bird’s luggage space. Bernie himself was always elegant, and he was known for being perhaps the most fastidious member of our group, so when he opened the car’s trunk outside the barn, and I saw that it was beautifully lined with a light-gray patterned fabric, I froze.  But Bernie was a good sport, and gracious enough to allow me to think that it wasn’t a problem for him.  Fortunately several layers of plastic managed to do their job, and the trunk survived the trip back to Providence without a stain.

For now I’ll skip the details about preparing the pink, baby-like pig, including the part about soaking it upstairs in the tub in saltwater the night before, while we were having a party, and warning my friends not to pull back the shower curtain (we heard screams; they obviously hadn’t listened).  There’s also the part about the pig being too long even for our 30″ oven, so I had to scrunch it up on its side in an improvised pan.

But I’ll finally get to the original point, or at least the occasion, for this story.

In spite of his obligations to his own family, and to the large feast prepared every year by his mother, my dear friend managed to make it to our own Christmas dinner in the old wooden row house, not only as an honored guest and confederate, but as dessert angel:  Earlier in the day he had dropped off a large Struffoli his mother had made (here is Michele Scicolone’s recipe), which she had formed inside an angel food cake pan, removed and then carefully wrapped in cellophane and ribbon.  Of course it wasn’t very German, but it was very, very beautiful, and I had never seen anything like it.  It was also delicious. I had not even heard of Struffoli, before, but that Christmas I decided that it was the happiest, most festive cake I had ever seen.  It still is.

Earlier this year I learned that my old friend, with whom I had lost touch after he had married, died four years ago.  In case I didn’t say it enough back then, I’ll say it again.

* For far more information on preparing suckling pig than I had back in the 60s, see this site.