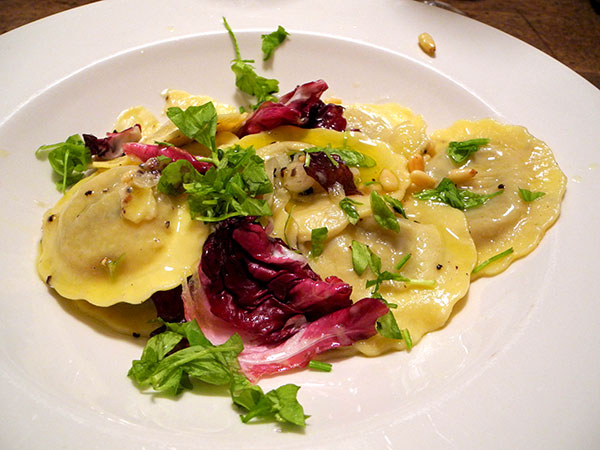 [only a little bit of] assembly is required

This entrée, as with others involving the assembly of similar well-made filled pastas (as, Agnolotti, pansotti, tortelli or tortelloni, to name a few) purchased commercially, is so easy to put together that it’s downright embarrassing, especially since it, and others like it, can be incredibly delicious – and also incredibly quick.   Because it takes so little time, it’s best to turn on the heat under the pasta water as soon as you’ve even thought of making this dinner, then pour a glass of wine and bring out the breadsticks, because it will only take five minutes or so to prepare the rest of the ingredients.

These meals are also almost impossibly pretty, something I think is important in presenting a meal.

Note:   Last night we had already sat down and begun eating before I realized I hadn’t shaved some good Parmesan cheese over the pasta after it had been placed in the bowls (it had been a while since I had served mushroom-filled pasta, and I may just have been out of practice).  I didn’t go back to the kitchen, but I promised myself I’d remember the next time; I believe Parmesan cheese tends to appear on Italian dishes more often than it really should, but this is one of those ‘should’ times.