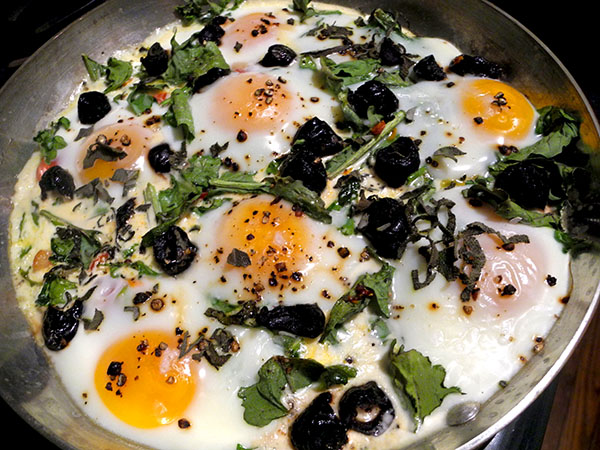 I had managed to cut off the end of my most important digit while using a mandoline to put this meal together 11 days ago. Knowing something had gone wrong, I immediately pressed index finger and thumb together very firmly and finished preparing the potatoes before I stopped to check the damages. They were considerable, but the meal was terrific, even if I have to assume that I was literally a part of it.

I’ve had to keep the wound dry and I was told it could not be covered with a latex glove until it had totally closed and was pretty secure, so making dinner, even washing the dishes of a made dinner, has been out of the question until, well, yesterday.

On Friday I was told that I would probably be told Monday that I was now free to do stuff in the kitchen, and that’s what happened, but that day was my birthday, and we dined out with friends Michelle and Felix, at Faro, in Bushwick. No kitchen for me that day.

But I had actually jumped the gun, a little, the night before.

I had not prepared a real meal in 11 days, but on Sunday I was determined to do something very easy that might also include a lot of perishable vegetables I had around that were about to go beyond their natural expiration date.

The baked egg dish I whipped up with one hand tied behind my back (never touched anything with my injured finger) turned out super, and it did virtually empty the shelves. 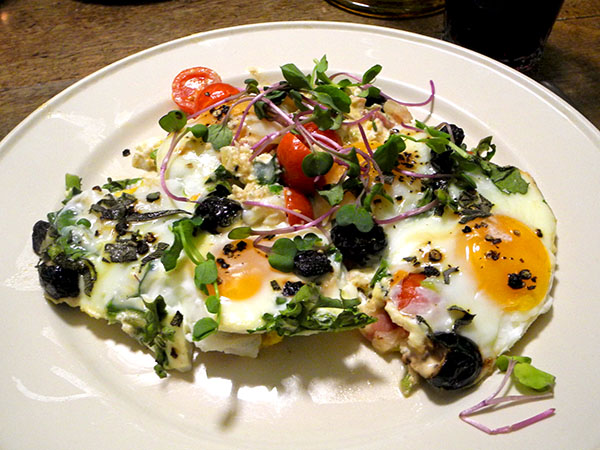 I’m not sure I’m remembering everything that went into the mix, which I baked in the oven at 375º for about half an hour, but it certainly included olive oil; 4 or 5 small scallions from Norwich Meadows Farm; a few ounces of Colameco’s uncured diced pancetta from Whole Foods; torn arugula from Lani’s Farm; a few tablespoons of organic heavy cream; one tiny hot yellow pepper from Eckerton Hill Farm; 8 eggs from Millport Dairy Farm; 15 cherry tomatoes from Alex’s Tomato Farm, Carlisle, NY, at Chelsea’s [Down to Earth] Farmers Market; salt; pepper; black oil-cured olives from Whole Foods; finished with some Hong Vit micro radish and a very small amount of pea shoots/sprouts, both from Windfall Farms, scattered on top once the eggs had been plated; a small jar of an aromatic seasoning blend called L’eKama placed on the table with the eggs