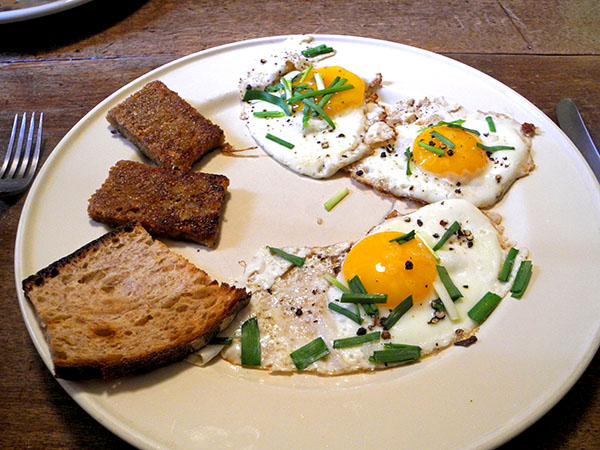 Today, after encountering some difficulties in slicing the loaf the first time I tried, one week ago, I finally arranged to serve a breakfast (actually a late lunch) of eggs and, ..scrapple!

Okay, it does look somewhat monochromatic; I don’t know why I couldn’t have introduced a cherry tomato or two.

Although conventional wisdom would describe this as a Lancaster County breakfast, it would not have looked out of place in the area my parents were from in Wisconsin, or, for that matter, in the areas where their own families had originated early in the 19th century. The Amish themselves, popularly known as ‘Pennsylvania Dutch’, whether in Pennsylvania or elsewhere, are not ‘Dutch’ at all, except that, along with the people of the Netherlands, they share membership in the larger Germanic ethnic group.  For hundreds of years the appellation, ‘Dutch’ was used in English to describe people from both the Netherlands and Germany.

As for the scrapple, unless you are or feel close to the culinary traditions of ‘the Dutch’, in the larger sense, don’t look carefully at the picture below. 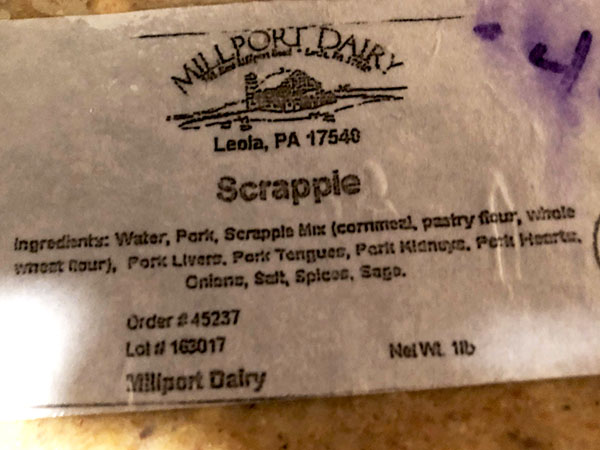 It was a lot of fun doing this for the first time, and it was delicious. Oh, and, compared to bacon, it’s obviously ein Schnäppchen [a bargain].

There will be more color the next time.

The presentation was clearly much simper than most of these breakfasts/lunches, in deference to a culture I respect, but to which I’m not actually attached.