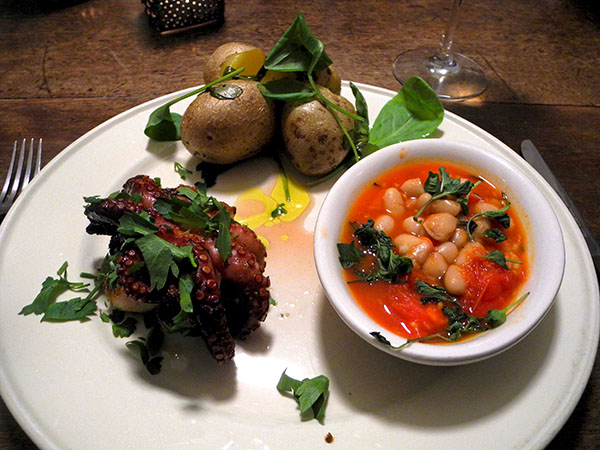 There’s no way can I properly describe this meal. To begin, there’s the miracle that I am even able to obtain octopus on a coast so rich in seafood but where this cephalopod mollusk is not found, and then actually cook it to the point of our shared satisfaction; these things already exceed my talent for expressing an appreciation of the superb dinner we enjoyed last night.

I have no idea why, unless it was for its perceived oddness, but for decades, even before I had ever actually tasted it, octopus had been my culinary ‘grail’. I went on to enjoy it many times, including in meals I prepared myself; this dinner more than succeeded in confirming and continuing my devotion.

My choice of vegetables was actually barely a choice. I thought potatoes would make sense, but I didn’t have enough of one variety for a side, so I combined 2 kinds.  I had no green vegetable other than some large Brussels sprouts, which didn’t seem right. I did have some tomatoes sitting on the windowsill, which felt like a natural. Then I thought of the little bowl of cannellini beans and their juices that remained from a can I had opened for an earlier meal, but including 3 vegetables seemed like it would be a little excessive until I thought of combining tomatoes and beans; it was getting pretty late now, so I rushed to the laptop and almost immediately found this recipe, which turned out to be perfect.