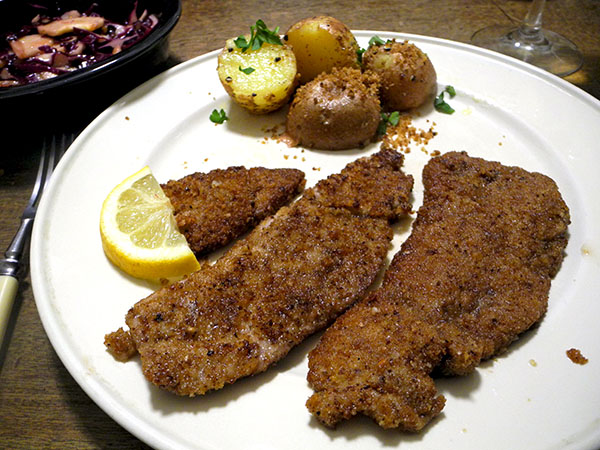 I’ve got the cooking process down, if not quite pat.

‘Wienerschnitzel‘ is not yet something that pops up inside my mind’s rotating index of reiterated home meals, but it’s on the way. The idea of this classic dish occasionally pops up inside my head, even when I’m not in Germany or Austria, but unless I see a supplier or butcher offering it, in whom I have real confidence, I’m not likely to bring home a veal cutlet.

Last week it came together: One of my favorite cheese makers (goat and cow), whom I visit regularly in the Union Square Greenmarket, had a package of frozen cutlets (baby boy goats and baby boy cows don’t produce milk, which explains that side of the noble craft of cheese making), and it was just the right size for two.

I think I can say in all honesty that this is as far as I go with deep frying. While frying a breaded cutlet is in fact nothing like deep frying, the effect is somewhat comparable.

I was very lucky to have some veal lard on hand – an exceptional ingredient, excellent for service in this meal – and in many others – which I had rendered from some veal fat obtained from Consider Bardwell months ago and had then stored in the freezer.

I did some research before starting to prepare last night’s meal, and I learned that my ancient rolling pin (one piece; no handle or ball bearings) couldn’t really substitute for a proper mallet in reducing the cutlets to the desired 1/16″ to 1/8″ thickness: The meat should be pounded in order to tenderize it as it properly, and rolling it – regardless of pressure applied -just wouldn’t do it. Fortunately I have an equally ancient wooden mallet that’s worked fine in the past (and also a sturdy kitchen counter), although all other personnel in the area (i.e., Barry) fled the kitchen before I started.

For the recipe, I read straight from my copy of Mimi Sheraton’s classic “German Cookbook”, which I bought over 50 years ago. This modern link uses essentially the same text.

I should warn that the instructions, in both iterations, says the fat should be “very hot and bubbling”, but that the breaded veal should still be fried “slowly”, so adjust your technique accordingly. I missed that contradiction, but managed to adjust the pan just in time.

The Schnitzel were very juicy, but the coatings appear to be a little dark in the image above.  The color almost certainly comes from the sturdy whole wheat flour I used, and also the breadcrumbs, which I make from a large variety of breads, almost all of them whole wheat.

One more observation, this one even more a question of aesthetics: I should have avoided garnishing garnishing the potatoes with those breadcrumbs: Their superfluity was obvious the moment I had spooned them onto the plates. 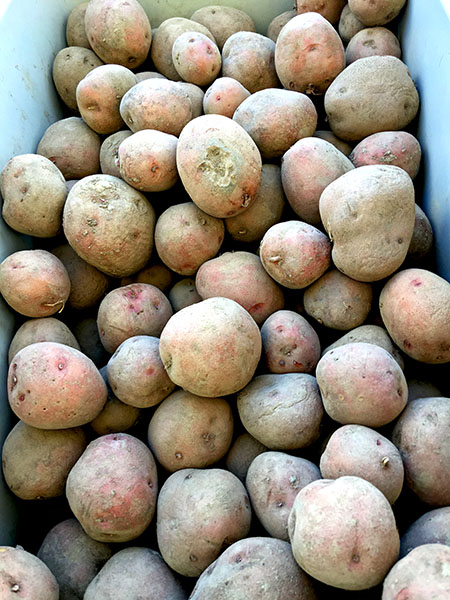 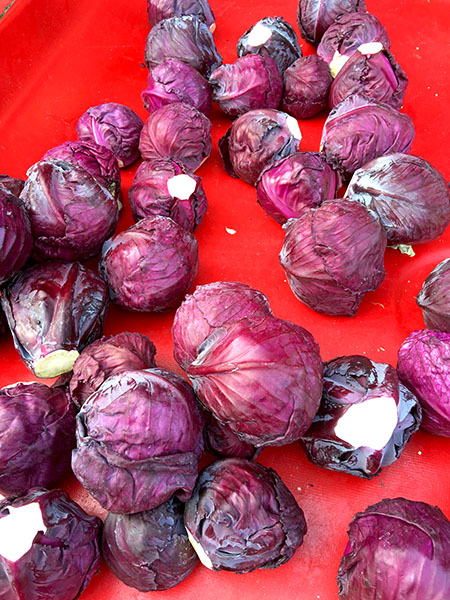