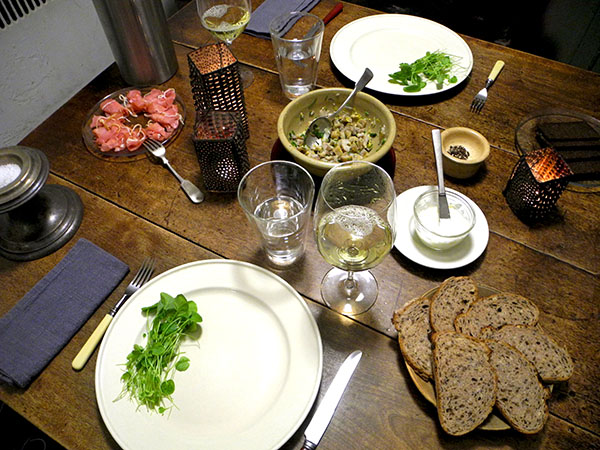 A delicious winter picnic at home, with a very heavy German accent (the picnic, that is).

Unusual for this site, the leading image (here the only one) is of the entire old birch table, rather than just one of the plates: I thought it this view would cover more ground, so to speak.

The breads were nearly as important to the meal as the fish and the meat. The sturdy New York state sourdough combined the attributes of a traditional German bread with varieties introduced more recently into a culture looking for even more diversity in foods already very wholesome.

The pumpernickel however (on the upper right in the picture), with its “characteristic deep brown color, sweet, dark chocolate, coffee flavor, and earthy aroma” [a description found in Wikipedia], and especially when it is in this intense, compact form, is totally German. Its addictive virtues (along with those of all the other varieties of thin, heavy, moist Vollkornbrot), made it one of the first things I fell in love with when I arrived in Hannover in June, 1961; I ate it like candy. I think these pre-packaged treasures, of any grain, are the only commercial breads – and the only sliced breads – I would ever expect to bring home.