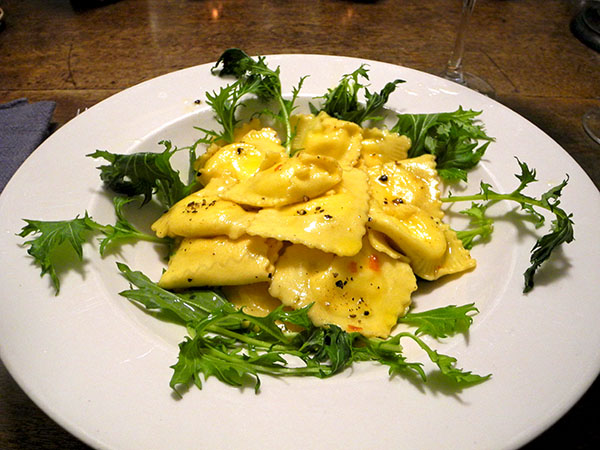 I had decided to take a break between two strongly-flavored meals, so my thoughts went to a simple pasta, and one of Luca’s fresh pastas in particular, my idea being that many of his specials could be best enjoyed with the very lightest of additions.

When I arrived at the counter I saw a honey and ricotta ravioli, something I hadn’t come across before. The pasta assistant suggested a brown butter sauce would be enough. But enough is sometimes not enough, so my mind strayed to the beautiful young mizuna I had at home, and once I had begun assembling the dish, to thoughts of including some freshly-ground Tellicherry pepper and a dash of my magic dried golden Habanada as well.

It was delicious, but very rich, and, yes, it was a little sweet, so the next time I’ll prepare a smaller amount, and serve it as a primo, following it with a small grilled steak, or agnello alla scottadito.