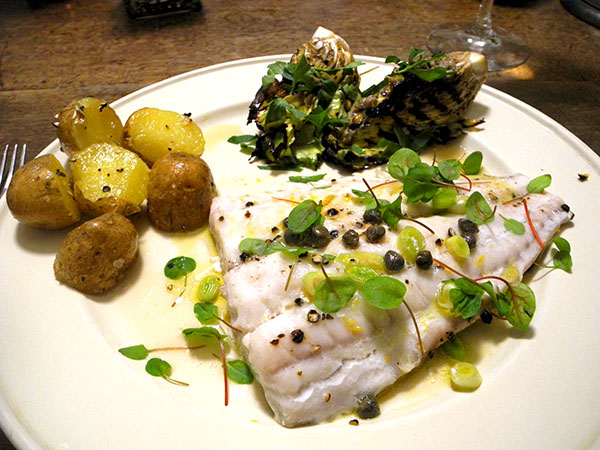 It was a surprisingly wonderful tripling (used in the sense of ‘pairing’, but with 3 elements instead of 2).

The pollock had come first, picked up earlier in the day at the Greenmarket. That evening I pared down the possibilities for a vegetable and selected the last of our Campo Rosso radicchio. Then, because I was afraid that those two might make for a pretty light meal, I looked around in my [figurative] potato bin for a suitable starch.

It turned out they played well together very well, the flavor of each informing that of the other two.

The fish was a delicious as ever, and it remains a favorite of mine, and its lack of general popularity baffles me. The chicory I had was a particularly delicious variety of a plant I’ve come to love more and more, and I may finally discovered the secret to to pan-grilling this vegetable (a very hot surface). Finally, while the small potatoes I used (one of  my favorite varieties) had started out looking a bit shriveled from age, I suspected that would mean they’d taste even better than usual (my suspicions were confirmed; the real surprise was that the boiling process totally revived their youthful skins).