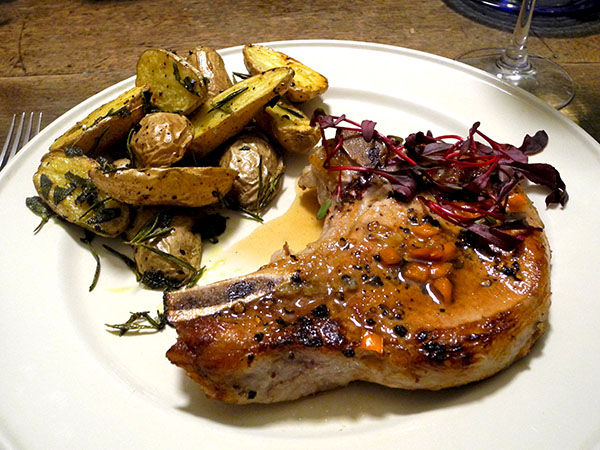 I’ve been working with the same very simple recipe for years, but this was probably the richest, and even the most colorful version yet.

I have no idea why. The only real changes last night were, one, that the meat came from a Pennsylvania Deutsch [sic] farm I’ve come to respect hugely for all of its produce, but which I’ve never seen offer this fresh pork chops. They were delicious. The second novelty, an a happy circumstance, may have been my ability to use, as the other major ingredient to the recipe, a very sweet local lemon grown by David Tifford of Fantastic Gardens of Long Island.

There was also the fact that I included one of the last fresh habanada peppers of the summer, and it clearly made a taste (and visual) impact, but this wasn’t the first time I had included one in this recipe.

The potatoes were no less delicious, and I imagine that was at least partly because of the appearance of more of that heatless, bright floral pepper, but in a very different guise.