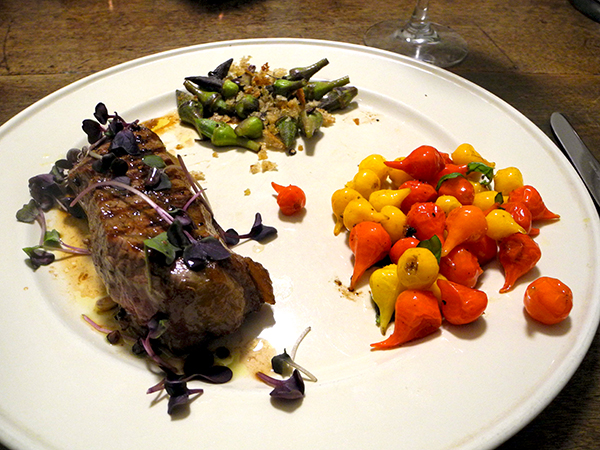 The steak was familiar, even to the topping, and so was the okra, even if these were the smallest I had ever cooked, or seen, for that matter. The sweet peppers looked only a little like any I had seen before, and they were definitely smaller than any I had cooked until last night.

I bought the okra because this scant handful was all that was left in the plastic basket in the farm stall; they looked lonely and they were cute.

The peppers, I was assured by the farmer, Chris Field, were not spicy; I love peppers in any form, and I decided these tiny ones could also liven up a meal with their color. I never suspected that they would have a very distinctive flavor, and that they would almost pop inside the mouth, both properties a bit like the South African ‘Peppedew‘.  While talking to Chris at his stand on Saturday, I forgot to ask what they are called, but I may have found an answer while looking on line today: the name may be ‘Little-Beak Peppers’, or ‘Pimenta Biquinho’.

I didn’t think I would be serving the little okra and peppers together (way too cute), but that’s what happened when I lined up the alternatives for 3 meals this weekend.

Yeah, it was pretty cute.