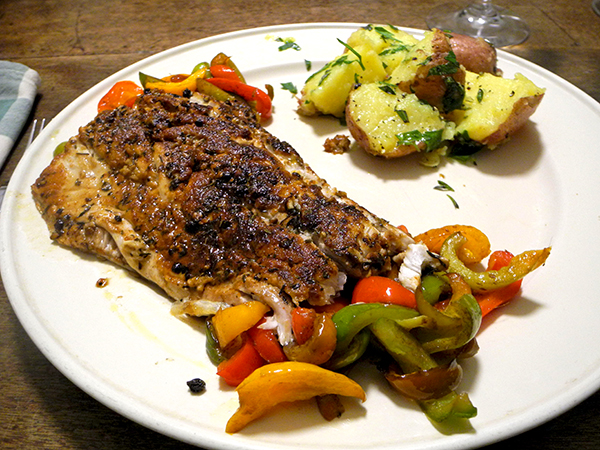 Bluefish. I had convinced myself that I could prepare it without using the oven. We hadn’t enjoyed it as an entrée in almost a year, which certainly eliminated the boredom factor (always a concern when you’re cooking fish several times a week, and it’s almost always local).

It was the first time I had used the recipe, and I don’t know where I found it, but I had printed it some time ago, with the caption, “‘Provincetown Bluefish’ (spicy)”. I was surely attracted to the reference to the Cape paradise whose culture was still very Portuguese when I first played there 50 years ago.

The single fillet I brought home on Saturday weighed about 18 ounces, far more than I would normally want for the two of us, but it was the smallest one in the stall on Saturday, it was, as always, inexpensive, and this superb pelagic fish sport fish is a very healthy choice, and currently a sustainable one.

Bluefish needs some kind of distraction to perform on the plate at its best. Usually that means some form of acid, and tomatoes are the most common. This time the distraction was provided by a lot of spice (although not the fiery kind), and some sweet peppers rendered a little more pungent with a little anchovy, and a little more sweet with a drizzle of balsamic vinegar.