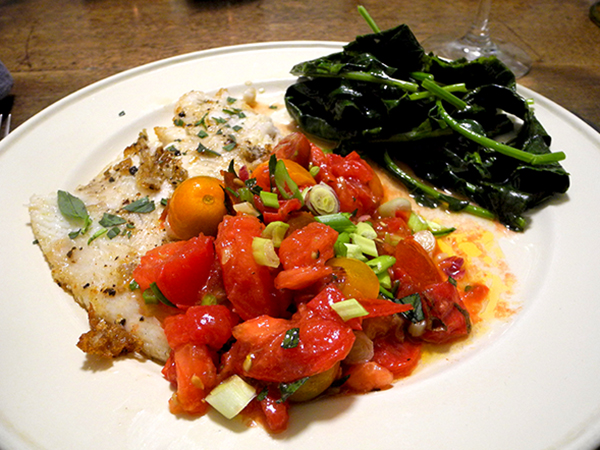 Home alone. I don’t always cook a proper meal for myself on the rare occasions that happens, and unfortunately I hadn’t arranged to share my meal with a friend. But at least by Monday morning I had thought ahead enough to purchase some very fresh fish for 2 successive meals, one solo (the Union Square Greenmarket isn’t open on Tuesdays).

That night, before I actually began thinking about what I would do with my one flounder fillet, I had assumed that whatever I did it would be very minimal, and end with an unusual herb or micro green. Then I noticed that a few of the heirloom tomatoes on the breakfast room windowsill had become as ripe as they could possibly get, so I turned to an only-slightly-more-complex recipe I had used a number of times in the past, and I jumped off from there, with a few variations. 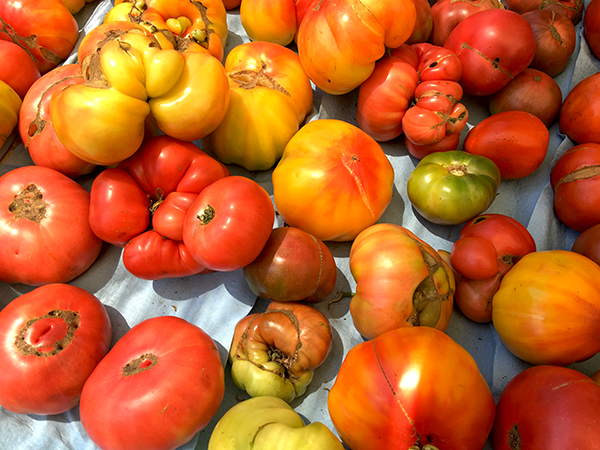 I have usually used good cherry tomatoes for the ‘butter’, but the version I composed last night included very ripe heirlooms, almost entirely, and I think it was the best one yet.

Note: After the photo at the very top was taken, I drizzled some of the tomato liquid onto the exposed fillet, and it was ambrosial! 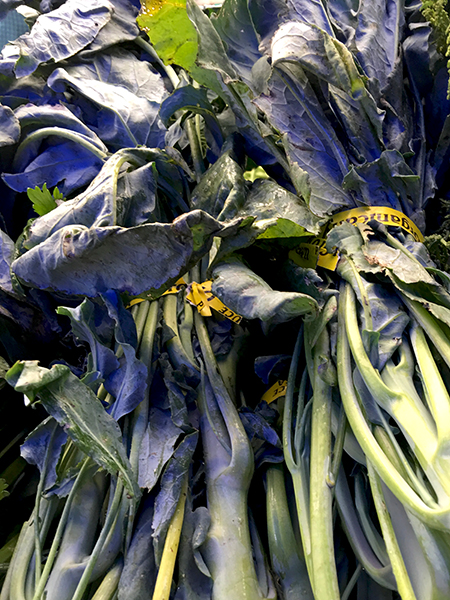 The spigarello broccoli was absolutely delicious, and unlike any green I had ever tasted. I generally prefer not to parboil any leafy vegetable, and did so reluctantly in this case, since I was a little concerned about the sturdiness of the stems, even though I had cut off most of them. Unfortunately I drained the spigarello after only about 3 minutes, which wasn’t quite enough to soften them; the next time I will test them while they’re boiling (or be sure to remove all of the stem, even if I have to admit the stems look pretty cool on the plate).

The leaves, by the way, are probably sturdy enough to survive a longer blanching without losing their own freshness.  I wonder how that excellent design came about? I didn’t squeeze the greens after they had been drained and before they were sautéed, mostly because I didn’t have a ton, and didn’t want them to disappear before I got them to the plate.