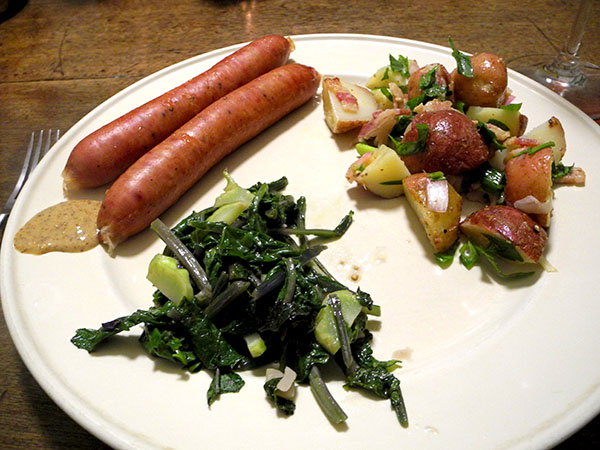 Not a fully traditional 4th of July dinner, but then it was actually only the 3rd of July.

It wasn’t even a particularly German meal.

Yes, I knew that kielbasa was not the American hot dog, or German in its origin, even if most versions actually are more yummy than a hot dog, and perhaps at least as good as some German sausage; the mustard I used wasn’t yellow American, but it was whole-grain and German in style, and very tasty; the potato salad was nothing like most ‘creamier’ versions that are being enjoyed this weekend, but the formula I went with gave me an excuse to use some unusual spring alliums and herbs I had on hand, and it was pretty light (clearly not an adjective usually associated with this dish); finally, the idea of braised greens as an aside, especially if they belonged to a somewhat exotic Japanese turnip, would likely be anathema to most Americans.