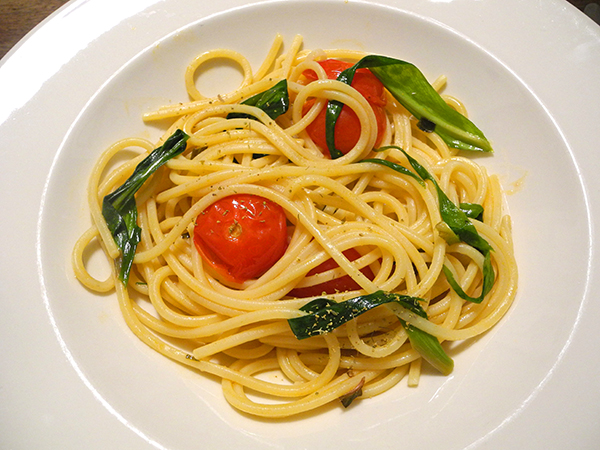 What to say about this simple assemblage? It was improvised, and almost anyone could have put it together. There was however, one exceptional ingredient, and it made the dish itself exceptional.

I was in Chelsea Market yesterday, browsing the platforms and shelves of Buon Italia, one of my favorite food shops anywhere. Counterintuitively, inside this emporium of Italian cookery I had actually been looking, with no success, for mace, preferably whole blade mace (it sounds like I know what I’m talking about, but that’s not altogether true).

Then I spotted it. The small plastic container was one of about a dozen arranged on a shelf some distance from all of the other dry herbs and spices, and the label read, in part, “Organic Wild Fennel Flowers”. I live in Manhattan, which would seem to make it as likely as also impossible to come across it; in any event, I had never expected to be able include this almost legendary ingredient in my modest home larder.

It was pretty pricey, but I bought one.

I think it’s going to change my life.

But first of all, I want to correct the misconception that this very precious herb can be described as fennel flowers. What I brought home, in spite of the print on the label, is fennel pollen, hand-collected in Italy from common wild fennel.  Second, I’m putting myself on notice right now, in the range of anyone able to read this post, that I will resist the temptation going forward of incorporating a pinch in every dish I put together.