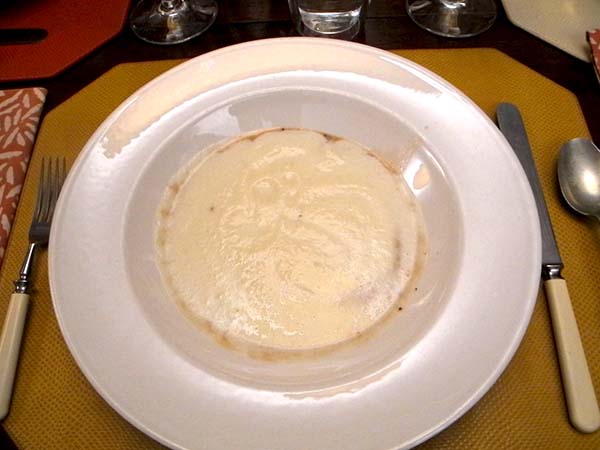 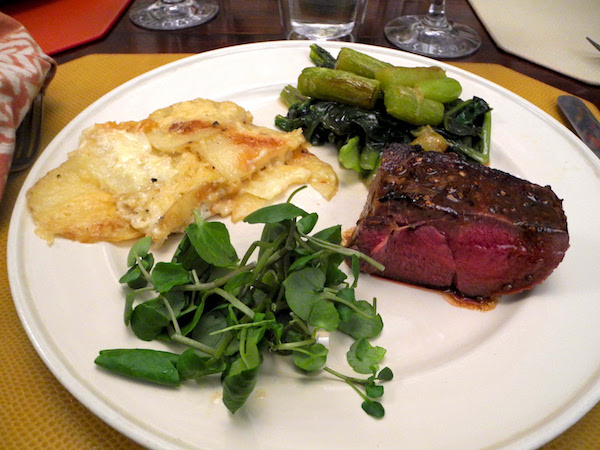 I don’t often get a chance to enjoy a meal like this, either at home or out. This is America, where ordinary folk can only enjoy genuine game if they import it from another country, and that means paying a serious premium (it’s a long story, and not one which makes our food regulations look good).

The elk sirloin steak I prepared Tuesday evening was a gift of a friend who has a cousin who hunts, in Kansas. Actually we were given two packages of elk, the other was a flank steak. Each package weighed around 20 ounces. We decided we would share each of them with two different people whom we know are interested in the kind of meals we like to put together (sometimes with good success).

I panicked a little bit the day before our guests arrived last night, when I started to think that 20 ounces meant there would be only 5 ounces of meat per person; that amount seemed just a bit mean, but eventually I persuaded myself that what I had available was pretty much what most knowledgable sources I came across suggested was a proper portion size for a meat this rich.

Besides, I had seen to it that some equally uncommon vegetables would be sharing the billing.

We began by nibbling on some long whole wheat rustic breadsticks from Buon Italia, while sipping sparkling wine.

I found the recipe for the celery root soup, one of our favorite starters, and usually reserved for a late fall or winter holiday meal, years ago in a ‘Pairing’ piece in the New York Times. It’s much easier to make than it sounds, and, except for the final assembly, can be prepared ahead of time.

Putting together the potato and horseradish dish could hardly be simpler (I kept thinking, shouldn’t I be adding something to these very few ingredients?), and it too was assembled and cooked before the guests arrived. I simply thinly sliced 3 large Yukon Gold potatoes from Whole Foods, and arranged them in layers shared with almost a cup of shredded horseradish, also from Whole Foods, and two cups of heavy cream. The casserole went into a 400º oven, uncovered, for about 15 minutes, then covered with aluminum foil and baked for another 30. I placed it in the refrigerator for a while, later removed it, let it come close to room temperature and then warmed it for 12 minutes or so in advance of serving.

The celtuce, which I had gotten from Lani’s Farm in the Greenmarket, was also largely prepared ahead of time, and only needed to be sautéed, the stalks and the leaves in succession, then drizzled with some of their juices. This link will give you much of what you need to know about this vegetable, as well as the basic recipe I used yesterday. My adjustments included parboiling the stalks in a much smaller volume of stock, and using far less butter than Foragerchef seems to indicate.

The excellent local cress, from Stokes Farm, needed absolutely nothing after it was rinsed and drained.

The elk, especially because I didn’t want to overwhelm the elk with a major marinade or a sauce, could hardly have been easier to prepare. I took my cue from an almost-30-year-old Daily News clipping which described how Brendan Walsh (we loved Arizona 206) treats a venison steak. After rubbing softened butter into the steak and pressing some strong freshly-cracked pepper into, I let it sit for about an hour, I simply sautéed it for a few minutes on each side, waiting to turn it until juices began accumulating on the surface, removed it to a wooden carving board and cut it into four sections, poured a bit of cognac into the pan, stirred it over hight heat for 1 or 2 minutes, while scraping the drippings, seasoned it with sea salt, and then, off heat, I added a little butter, pouring it over the meat which was now resting on warm plates.  After the photo was taken I remembered that I wanted to scatter some chopped parsley, from Eataly, over the elk.

I was prepared to serve a cheese course assembled from a selection of Consider Bardwell Farm goat and cow cheeses, but we agreed to pass on it, perhaps because of the hour and a certain satiety after second helpings of the potato-horseradish-cream casserole.  As a consolation, I brought out a package of some special Italian dried figs, Colavolpe Fioroni Classici, from Eataly, which I had expected to serve with the cheese.