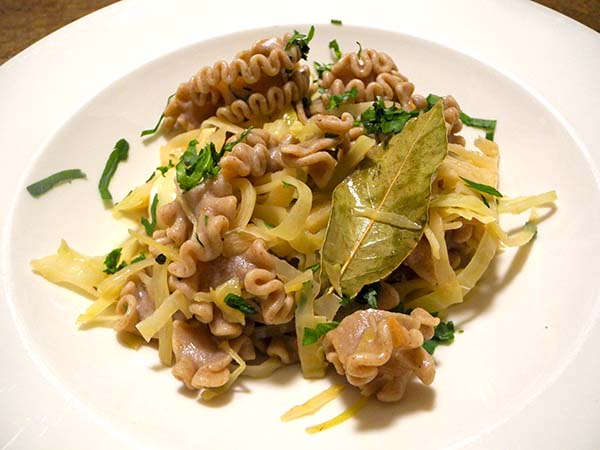 a fantastic dish, and assembling it could hardly have been easier; try it!

When I manage to put together a meal as delicious – and as simple to duplicate – as this one, I want to broadcast it as well as I can. Mark Bittman’s ‘Pasta with Savoy Cabbage’ recipe is brilliant to begin with, but I was very lucky to have a very special local pasta (with local grains) on hand to substitute for his suggested, and more familiar, “dried pasta, like spaghetti.”

My secret was a package of New York’s own artisanal pasta, by Sfoglini Pasta Shop, specifically, their ‘Emmer Reginetti‘, which I had picked up somewhere recently, although I’m not certain where. For more on the fascinating story of emmer (aka farro), start here.

It was a perfect match for a rather cold evening on one of the first days of spring, especially because the other principal ingredient was a fresh cabbage which had presumably been harvested on one of the last days of autumn, at least 3 months ago.

The miracle of cabbage: It’s what kept many of the poorer folk in northern European climes alive throughout long winters without supermarkets or central heating – or animals or vegetables that were still alive.  But this isn’t our grandmother’s pungent crucifer, as attested by the recipe’s origin in the northern reaches of the Italian peninsula. The presence of bay leaf, anchovy, garlic, chile, and wine produced an aroma – and a flavor – which would awaken the most indifferent eater and please the most fussy gastronome.

I followed Bittman’s recipe pretty much to the letter, except that I used only 75% of its proportions, used a very different pasta, and finished it with a combination of parsley and lovage.