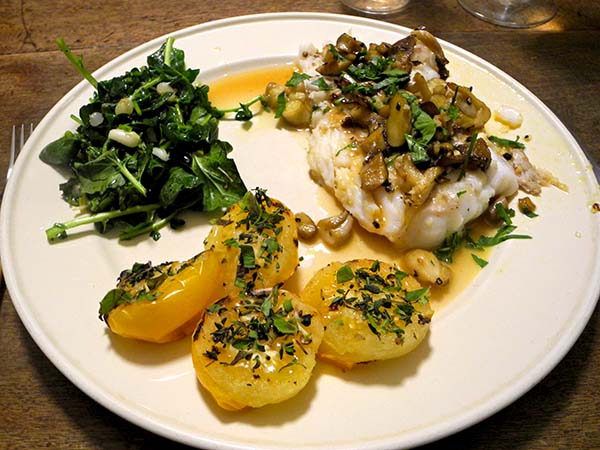 ‘Pan-Seared Cod with Mushrooms’: It’s a fascinating recipe, but I have to append a bold note to my copy: ‘do not try this again unless you really do have low-sodium stock.’ I can’t say I wasn’t warned, since the instructions had made it very clear; it’s just that I haven’t yet been able to locate a [good] vegetable stock described as low sodium.

I’ve made 2 adjustments to the original recipe: First, I used a quarter of the amount of mushrooms it suggests, as once before; and second, I used lovage rather than the parsley or chives indicated.  I also could have gotten away with maybe half the stock specified, since I included far fewer mushrooms than the site had instructed.

Once served, at least initially, the cod was more salty than either of us would prefer, but a squeeze of lemon and some good fresh bread (‘rustic classic’ from Eataly, sliced) allowed us to appreciate the food, and the wine, and in the end the salinity seemed to have disappeared.

I’ll still say it’s a good recipe, and not just because it’s something of a novelty, but it probably has to be used with some caution.