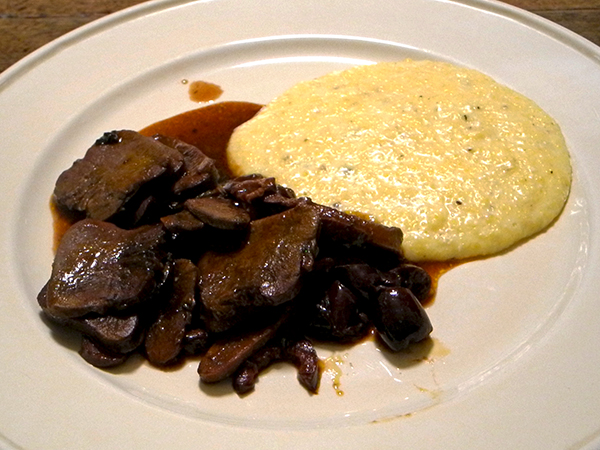 nothing green, and I had some; thought it inauthentic, but probably wrong

The picture pretty much describes the robust taste of this dish. Until I had actually served it, I had no idea it would be so rich. We were lucky that we had leaned toward the sturdier side of the red wine spectrum: The pairing was inspired, even if there was some luck involved.

Until the very last moment, and in fact not until I had almost finished simmering the tongue,  I had no idea how I was going to finish it.  I had found a simple and attractive formula for a sauce which involved a lot of (green) olives, a recipe characteristic of Venetian cookery, but it was described as a dish that should be served at room temperature, and that wasn’t what I was looking for that night.  I liked the idea of the olives however, so I went looking for another approach using olives.  While doing so, I accidentally found myself again in the good company of a very familiar (and very much missed) source, Kyle Phillips, with his own recipe, archived here.

I stopped looking further; it’s Kyle’s very simple and absolutely delicious approach which I adopted and describe below, along with the sources of the ingredients I used.

in a separate pan, one clove of garlic from John D. Madura Farm sautéed in a little olive oil until golden, removed and discarded, almost two tablespoons of good tomato paste added to the pan and diluted with about a cup of the broth set aside earlier, stirred over heat until mixed, then 12 ounces of pitted and roughly-chopped Kalamata olives added, along with 2 large leaves of Gotham Greens Rooftop packaged basil which I had frozen last summer, and a good pinch of wonderful dried Italian oregano from Buon Italia, salt, and pepper, and then the slices of meat, everything mixed together, the pan covered and simmered over a very low flame for about 20 minutes.