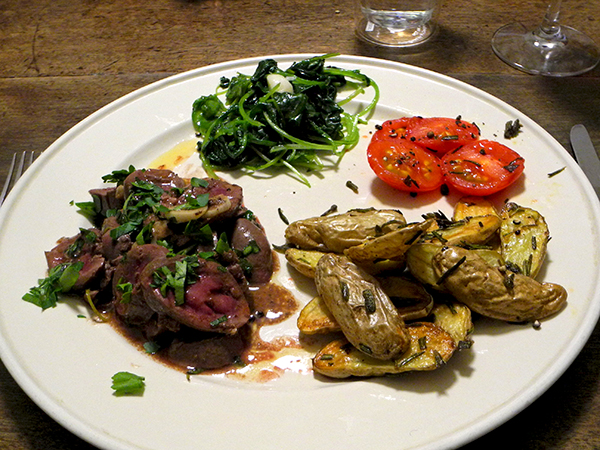 maybe my best Rognons de Mouton outing; thinking it was the sorrel

Every so often I think about offal, and then I have to do something about it.

Yeah. Well, this time I started by asking one of the sheep farmers I regularly see at the Union Square Greenmarket whether they had any lamb kidneys.  To anyone unfamiliar with this delicacy it might be a surprise to learn that I was actually surprised that the answer was yes. To explain, there appears to be a number of local offal fans who often sweep up any of these and the other types of innards which most people might not even be aware existed. This happens before I manage to get to Union Square; apparently innards people are early risers.

I learned today that there’s even a subgroup whose thing is consuming offal totally raw. Why am I not surprised?

Before I moved to New York in 1985 I traded with traditional butchers who still offered traditional, if not universally popular, fare in the form of kidneys, sweetbreads, tongue, tripe, brains, and of course liver, which is less exotic than most. Oddly, these shops were not located in communities where there were unusually large numbers of recent immigrants, but in middle class mostly-white communities.

I think that since then American middle class white communities may have lost interest in diversity, at least when it comes to animal protein.

I’ve always been interested in what is out of the mainstream, and living with the two volumes of Julia Child recipes for more than a few years, increased my curiosity and also gave me the means to satisfy it. I’ve cooked veal and lamb kidneys, sweetbreads, tripe, veal and lamb tongue, and both veal and lamb liver, but, so fat at least, I’ve skipped brains.

The recipe I used was mostly my own invention, a conflation of the Julia Childs recipes which had introduced me to kidneys half a century ago, what I have learned about Italian cooking over the years since I had moved away from Julia, and my imagining how a Mediterranean tradition might prepare kidneys in an age which generally appreciates a simpler cooking style across the board.

Someone please correct me if I;m wrong, but I think I get the Italian right by calling it, ‘rognone di agnello trifolati’ finished with a sauce of garlic, white wine, butter, parsley, and sorrel.  Whatever it’s called, it’s delicious.

Note: Do not wash the kidneys before cooking, as they will absorb water, and be very careful not to overcook them or the dish will lose more than its magic.