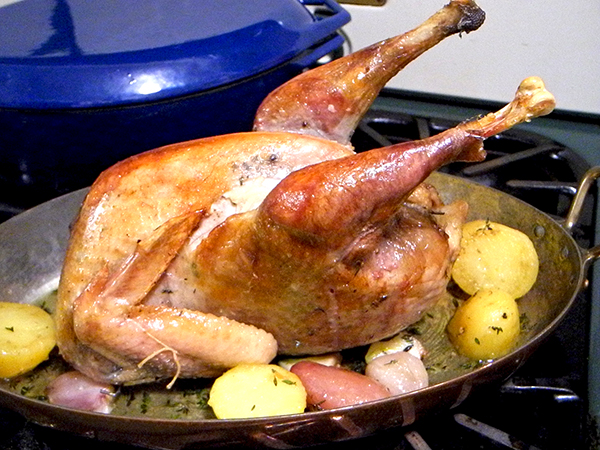 straight out of the oven, above, ‘carved’ and plated, below 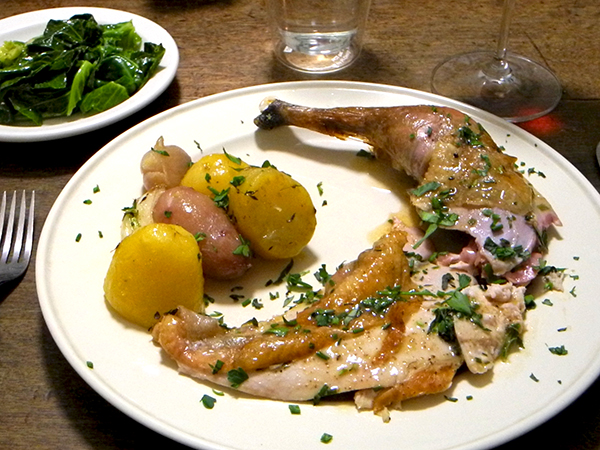 I’d cooked Guinea fowl only once before since starting this blog 8 years ago, although I think I may have prepared it at least once before then, in the darker ages.  In recent years I’ve rarely served any form of chicken at home, and when I do I’m pretty picky about it’s source.

And then, on Friday, while I was at the Lucky Dog Organic stand, I again spotted the dressed Guinea hens which are usually arranged on the table next to farmer Rich Giles’ own vegetables.  They’re raised by his farmer neighbor, Jennifer Grossman, and, for me, the fact that they were there had automatically given them an imprimatur way back in 2014.  On Friday they were being offered at half the regular price, apparently because the client of a restaurant customer had cancelled an event after Grossman’s farm had already processed a number of birds.  They were now looking for a new venue.

I could not pass up this opportunity, especially as I knew I’d have the time to prepare a roast of some kind on Sunday, two days later, and a warm oven seemed like it would be the right sort of thing for that day, since it was expected to be pretty cold.  I would have bought two, saving one for another chilly day, but my freezer was already pretty busy.

Because I had an entire evening to do it, I had a lot of fun washing, trimming, chopping, and filling up all the prep cups prior to actually placing the bird in the oven.  There were root-ish vegetables in the pan with the hen, and some tender collard greens (fittingly, also from Lucky Dog Organic) were easily cooked and set aside while everything else was in the oven, so I was able to concentrate entirely on basting and, eventually, checking for doneness (that last part was a little scary, but everything worked out fine.

The meal was a great success, largely because of the quality of the fixings, and because of the good recipe I came across on line, on epicurious.com (I roughly halved all of the ingredients for the single bird I cooked).

There were leftovers.  Yum.  Something like this warm salad may be their eventual disposition.