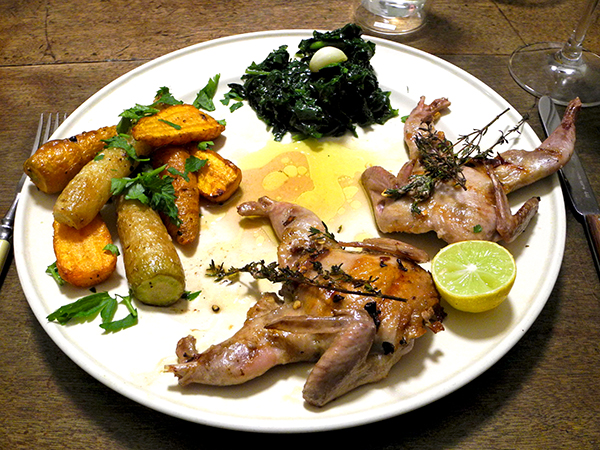 It must be winter: we’re now visiting the game pages. In reality, if we live in the U.S., it’s very unlikely that any of us is going to find real game on our tables, either at home or in restaurants, as I learned some time ago, and have complained about ever since – to perennially indifferent wind, but sometimes we can get pretty close to the real thing. Quail presents one of those opportunities, and it never fails to reward the resourceful stalker.

In fact, quail are grown domestically, and the plump little birds aren’t really that hard to find, at least in New York. I’ve seen them at Citarella, and at Eataly, which is only 2 blocks away, but I usually pick them up at Ottomanelli Brothers, on Bleecker Street, because I love those guys so much.

They are also just about the easiest fowl, domestic or wild, to prepare, at least if you go about it the way I usually do, using a terrific recipe from a book with the perfectly-descriptive title, “Italian Two Easy: Simple Recipes from the London River Cafe“.  Unfortunately I learned just this week that the book, together with its two companion volumes by the same authors, is now out of print.  I’m hoping that this terrible error will soon be corrected.  These 3 books are my favorite go-to cooking guides and inspiration, and have been for years.

I’ve prepared quail in this simple way at least half a dozen times.  The recipe, like almost every one by Rose Gray and Ruth Rogers that I’ve tried, is absolute perfection, and, yes, very ‘easy’.