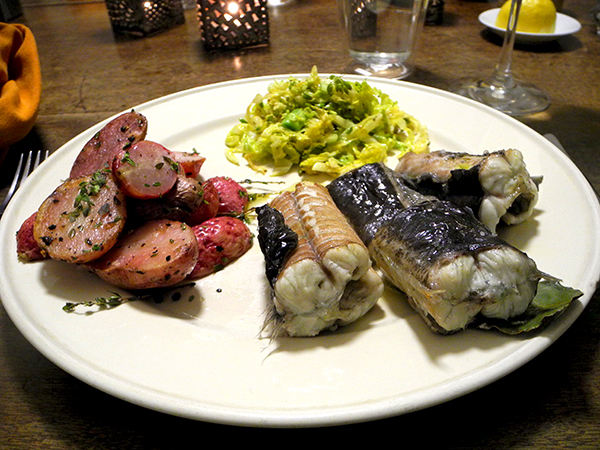 No one should have to wait to enjoy eel until christmas, especially if she or he isn’t really Italian, and doesn’t believe in christmas.  I was almost beside myself when I spotted eel at the Pura Vida Fisheries stand in the Union Square Greenmarket today.  It had been so long since I had last prepared it at home that, as I learned later, that it didn’t show up in this, my more-than six-year-old food blog. I had already picked up a bag of very fresh shrimp from Eco Shrimp Garden, some one hundred feet north of the shallow bucket of eel, but I was quickly reassured by all parties involved in my [gentleman’s] fishing expedition in the Greenmarket that the shrimp, perhaps more so than the eel, could wait another day.

In the past when I had cooked eel, I had stressed out over how I would prepare this exceptional fish, but I decided this time early on that I would go for the simplest preparation possible.  That meant Antonio and Priscilla Carluccio’s version of  ‘Anguilla alla Luciana, a recipe from Naples (thus explaining the meal’s wine pairing) which appears in what I consider the absolutely indispensable, ‘Carluccio’s Complete Italian Food‘.  Of course my decision was not in the least prejudiced by my fulsome affection for bay leaves in virtually any application.

Although I might have liked to finally use the ancient Rhode Island eel fork leaning in the corner by our table to catch it, modern urban civilization [New York City] meant that it wasn’t necessary.  My fish dealer had also skinned and cleaned the Anguilliform, an immensely valuable service, from what I understand. 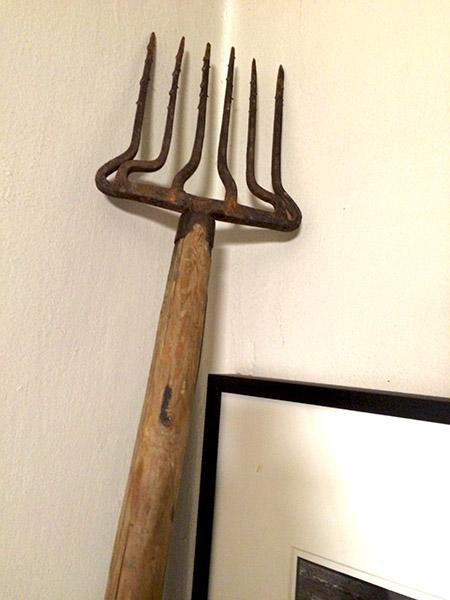 The fish was incredibly delicious (and, for those who might still be wondering, there was absolutely no yuck or yecch quotient). 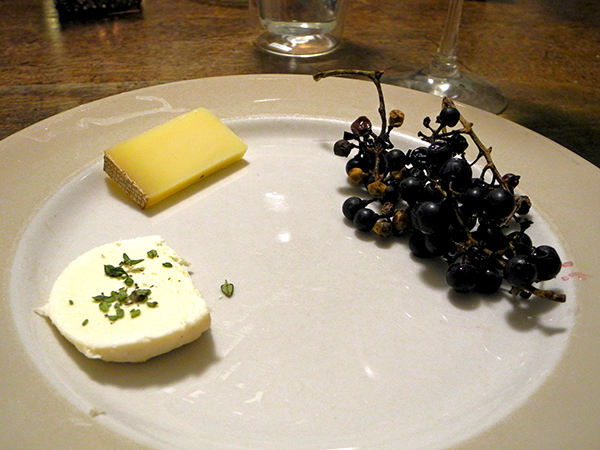 There was also a cheese and fruit course, with its own twist.  It was not the cheese that was out of the ordinary, at least for me, but the fruit, which I was told by Richard Giles, the Delaware County farmer, was a wild New York grape, one which had not yet learned to be sweet, but they were sure pretty. For anyone interested in such things, each grape contained a single (normal-size seed);  it wasn’t a problem for me, because I alway eat the seeds, even though, until today, I did not know that they were very good for you.