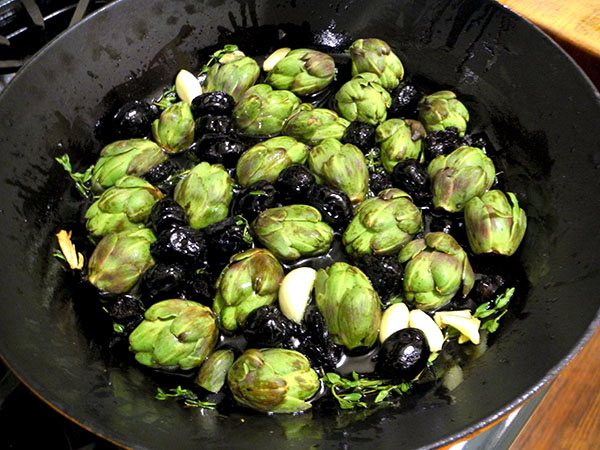 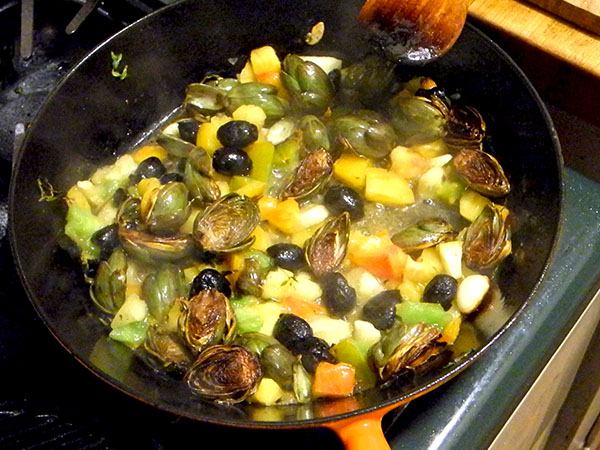 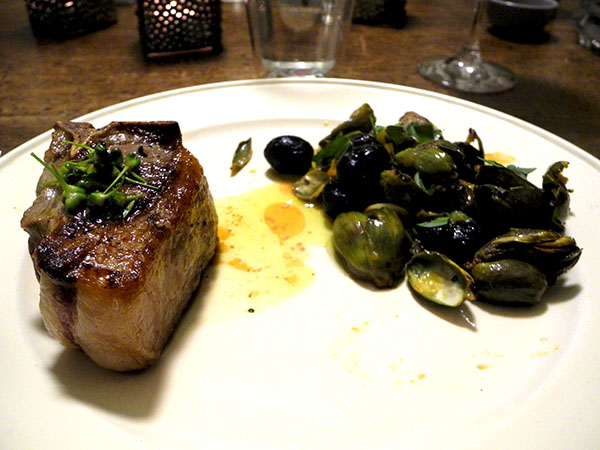 The images above show two stages of the vegetable sauté process, and as it was served with the lamb.

Better than ever, thanks to ramp fruit.

The two lamb chops we had last night were the second of two pairs inside a single package I had brought home frozen from the Greenmarket over two weeks back.  I defrosted the first two overnight and prepared them the next day, finishing with a little sliced shallot and some sorrel butter. At the time I thought lamb chops do not come any better, but the treatment I gave the second pair yesterday (again, defrosted overnight) may have excelled them.

The reason lies in one simple ingredient: ramp fruit, my favorite new thing, and one which is making its appearance just when I had decided the spring ramp craze had gotten totally out of hand.

The fruit were displayed on long stems in Franca’s Berried Treasures stall at the Greenmarket this past Friday;  they were new, and I had no idea what they were.  Her hand-lettered sign didn’t help much , since someone on the farm had put the wrong one in the truck that day.  There was still a good chance I was going to take some home, even before Franca said something about ramp buds, or maybe it was ramp capers, adding, when someone else asked what to do with them, that we should think of them as garlic.

I was now sold. totally.

On Tuesday I still had some ‘buds’ remaining from that same bunch (‘bouquet’), even though I had been using some in virtually every meal I’d prepared since.  Last night I snipped off another small amount of fruit from the end of their long dry stems and I did little more than gently heat them in a small tin-lined copper pan (recently acquired from a sidewalk vender, and becoming increasingly indispensable to my kitchen operations.  The tiny fruits gave up a terrific aroma and ended up on top of the pan-grilled chops. The meat had been seasoned with salt and pepper, but I did noting else to it squeeze a bit of lemon and a drizzle some olive oil over it.  It was terrific, the taste of the excellent lamb had grown a little garlicky and subtly floral.

I picked the superb vegetable recipe [from Mark Bittman] that accompanied the lamb as a way to use 12 of the smallest of artichokes which I could fine in the Greenmarket on Monday.  I had selected them from a basket containing both them and some a bit larger, because I had thought a diminutive size would make it unnecessary to perform any serious operations involving pulling off petals, slicing off ends and tops, or removing hairy chokes.

The au naturel route worked for me, but then I’m someone who always eats grape pits, usually skins of all kinds, and occasionally even peanut shells. Barry preferred to remove the outermost leaves before consuming the rest of the artichoke and its companion vegetables, so next time I really should bring home more artichokes, and allow myself a few more minutes of preparation time.

And, speaking of fruit, we enjoyed a dessert of a fine homemade sorbetto, made by a friend. 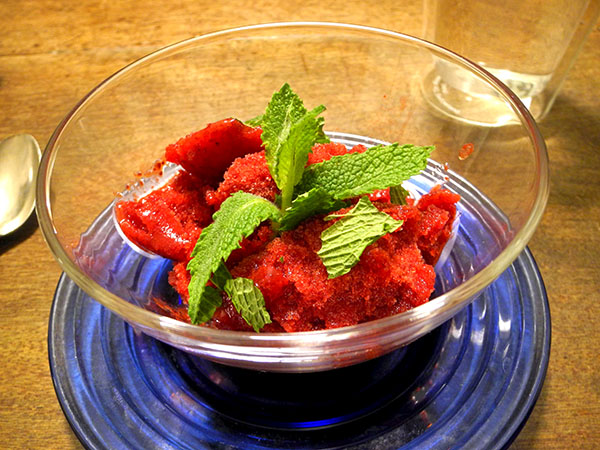