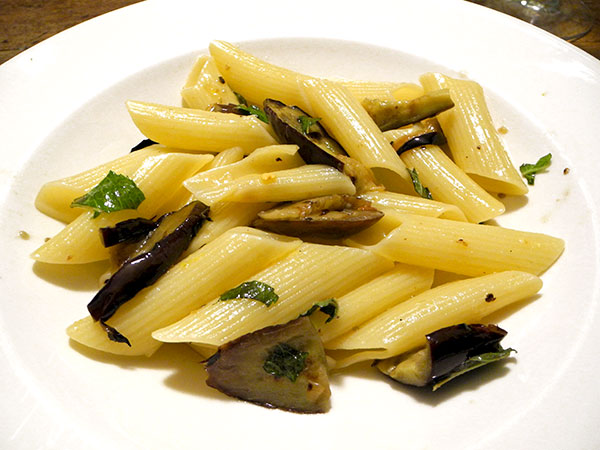 As with most meals, and especially the most simple, it’s absolutely essential to have great ingredients. Here that meant ‘artisanal’ (although, in fact, not made by hand), bronze die pasta from Southern Italy, the kind whose surface looks like it’s been very roughly sanded.   There were also the Japanese eggplant, the best I’ve ever had, and I was introduced to them by Nevia, of Bodhitree Farm.  The garlic was so fresh it was actually somewhat juicy.  Finally, I had forgotten to pick up mint at the Greenmarket, but Eataly’s vegetables are generally pretty super, often pretty local, and one of the best things about that food and restaurant emporium.

The first paragraph below is long, and heavy with my usual running sentence instructions (here, for a change, using two running sentences), but the cooking process is actually pretty simple.