‘Tautoga onitis‘.  In New York it’s called ‘Blackfish’, but in Rhode Island and elsewhere along the New England coast it’s know as ‘Tautog‘, a name which originated with the Narragansetts.  Surprisingly, none of this knowledge seems to have been enough to get this delicious fish onto our table, in spite of my passion for both New York and Rhode Island – until now.

I was at the Greenmarket today, mulling over the choices offered by P.E. & D. D. Seafood, when Wade asked me whether I had ever cooked Blackfish.  I told him that I thought not, and asked what other names it might go by.  “Tautog’ came the answer, and my ears perked up; I had remembered hearing the name during the time I lived in Rhode Island (from the mid-60s to the mid-80s).  I immediately got a terrific sales pitch describing the virtues of this fish, but I think I had already been sold as soon as I heard the word, “Tautog”.

It turned out I had made a great choice.  The Blackfish/Tautog was absolutely delicious, and it seems it would accommodate any number of preparations. I understand that it rarely appears in any market, but I will definitely be looking for it. 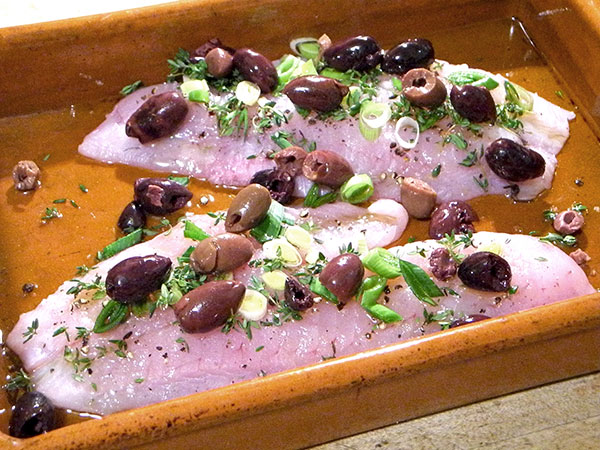 This is a glimpse of the pan just before it went into a 425º oven for about eight minutes.