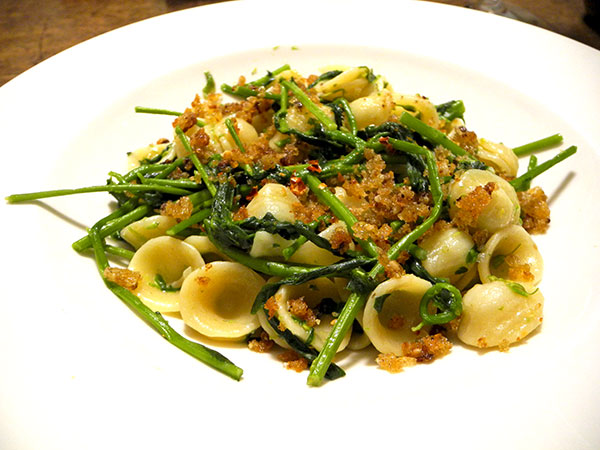 I used to prepare this dish as often as it might occur to either one of us, but the last time must have been before I began this blog, over six years ago.   I’ve had the package of dry orecchiette (‘little ears’) in the cupboard for a few weeks, but it was only last night that I could take advantage of a convergence of this excellent pasta, some spring Greenmarket broccoli rabe, and no dinner plans which could forestall our enjoyment of my favorite version of the Puglian favorite, orecchiette con cime di rapa.

It was as delicious as each of us had remembered.  There was one snag however, although one not related to the taste.  I have the willful habit of wanting to incorporate as much of a vegetable as I can when cooking it, and in this case I would have been better advised to discard some of the rapini stems, or at least remove them and cook them a little longer than the rest of the greens.  I’ve never encountered this problem before with this vegetable, but let’s just say that in a couple of cases last night the larger pieces were more than chewy.  After we finished dinner Barry proffered, “Stems are the gristle of the vegetable world.”.

Twenty-five years ago I discovered the recipe I still use, in the tall volume, ‘Italy, The Beautiful Cookbook’.  The book itself is indeed beautiful, as are the recipes.  It’s also a wonderful tour through a magnificent culture, one with which Barry I paired our actual Italian tours in the years after I acquired the book.