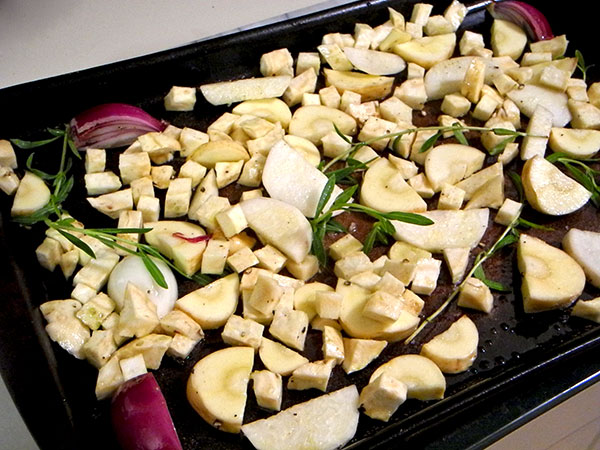 The roots came second in the preparation of this meal, not the usual order for me, but the slow-boiled beef veal tongue that they were to accompany had already been long absorbing the flavors of its broth when it was time to place the vegetables in a hot oven.  The picture above shows them just before that moment, and the picture which follows, of the finished dinner on the plate, was taken almost an hour later. 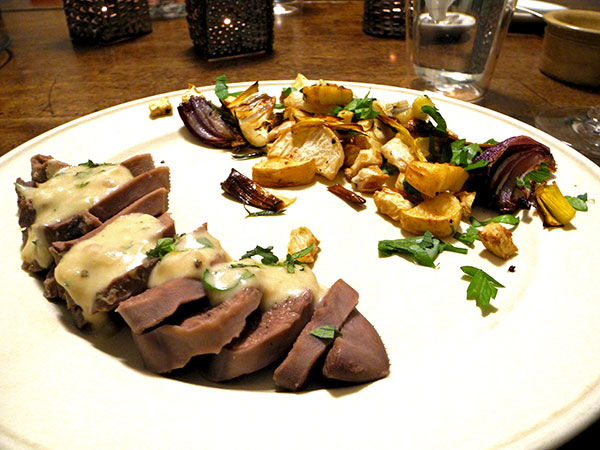 I love tongue (I’m talking about cooking here).  Most people may think of it as fairly exotic, at the very least.  The fact that it is in the category of ‘offal’, even if the etymology of that word has no relationship to a common like-sounding adjective, doesn’t help its popularity.  If anyone has experienced it at all, it was likely to have been as part of a platter of cold meats, where it might have gone unremarked.

I learned to appreciate it many years ago, as a cold dish and also as a warm entrée.  I was in my 20’s, and already fasciated by the great European cooking traditions, not least those of France and her adopted daughter Julia Child.  I have no interest in consuming really exotic animals, which, to someone still as Eurocentric as I, means anything which would not be found in traditional European kitchens, but I’m game for, well, . . . European game of course, but also offal.

Until this year, my experience with tongue was limited to beef tongue, and that was in my Rhode Island kitchen in the late 60s, 70s and early 80s (my guest-friends back in that era must have thought I was half insane, even before the first of my suckling pig meals).  It was my virtually complete dependence on the Union Square Greenmarket for food sources that recently introduced me to both lamb and veal tongue for the first time.   In almost 30 years I have never seen tongue displayed in the stores in my New York neighborhood, even before it became upscale ; it’s even difficult finding liver, which was always a staple when I was growing up (although it’s possible that offal is finally about to assume its proper place at the upscale meat counter).

I soon learned that if you start looking for a recipe for this cut of meat, or even just some inspiration, you could go on forever.  I jumped on this particular one from Epicurious, for Beef tongue, from May, 2000, because I liked the list of ingredients (and already had them on hand, except for the dill), and, while this may surprise some, it looked pretty straightforward (not too many steps). Since I had a veal tongue a quarter of the weight of the piece specified, I reduced the amounts of the other ingredients accordingly.

Note: After I had removed the tongue, I strained the cooking broth and placed it in a container in the freezer.  I’ll probably use as the basis of a cabbage soup lunch.