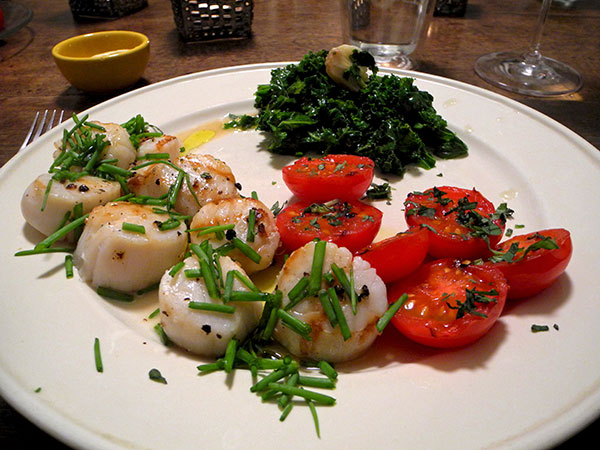 Hunting and gathering:  I picked up the scallops Monday in the Greenmarket, and I already had some kale, but I also wanted to add something which would both fill out the color palette on the plate and add to the modest amount of the serving, at least psychologically.  I pulled a few tomatoes off of the breakfast room window sill.  The onion tops were totally new to me. When I saw the hand-written sign under the awning of the Phillips Farm stall yesterday I had to check them out (it is still early April, after all), although I already knew there was just no way I was going to be going home without them.

I snap pictures of most of the things I buy at the Greenmarket, usually only to be able to have a record of my sources for the purposes of this blog.  The picture below was one of those snapshot ‘notes’, but I like the sense of place and the pocket drama it suggests, .  Also, this is the first time I’ve ever recorded ‘onion tops’.

the music was several of Beethoven’s Opus 18 Quartets