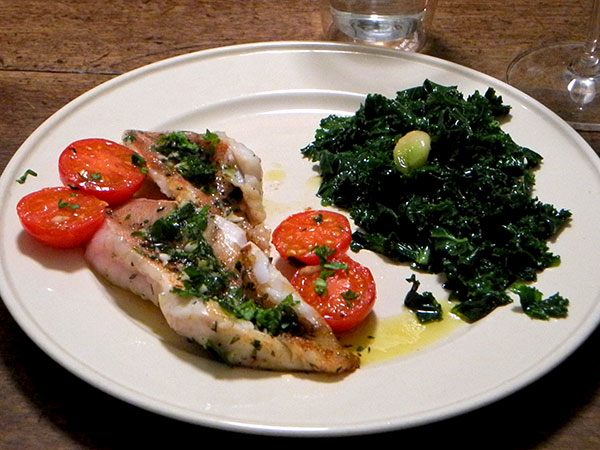 Note to self:  a delicious dish, more so for being easy to prepare, adaptable for most white-fleshed fish

What is a Red Perch?  I think I’ve finally found the answer, but not before I had probably bored too many very smart people with the question while at a very happy Artsy happy hour last night.

I had been very attracted to the vibrant appearance of these fillets when I saw them in the Greenmarket that day [April 3].  I wasn’t certain the I had ever prepared them in my kitchen, and so naturally I was intrigued even more.  Also, and the price was pretty modest.  I asked Paul, who was standing behind the big ice-filled boxes inside the Pura Vida stall and offering these gorgeous ‘red perch’ fillets to a local fresh seafood-besotted public, to tell me what he knew about the fish.  I don’t remember exactly what he said, but I read the fish with my own eyes and put together some connections I heard within his narrative.  A few minutes later I was on my way home with four fillets (three ounces or so each), where I continued my investigation on line later that evening.

I quickly learned that there was no record on this food blog of my having ever prepared this fish in the past, so I looked elsewhere, still on line, for some indication of what kind of fish I had purchased.  My search however was surprisingly frustrated (there are tons of different ‘red fish’, perhaps just as many ‘red perch’, and, it seems, an equal number of ‘red ocean perch’). Finally, at around 9:30 tonight, in the recipe section of my own totally analog home library, I picked out a very thin manila folder which I had once marked,  perhaps both optimistically and naively, “Ocean Perch”.  There it was, staring me in the face, a handwritten note which pointed to a real recipe, in a real book, a recipe which turned out to be both familiar and promising.  I must have followed it some time in the past, even if I never made the blog, because the scrap of paper bore the significant notation, actually more of a scribble, “very, very good”.   A few hours later I was able to confirm that it really was.

The appearance, texture and the flavor of the fish reminded me of the delicious freshwater perch I had enjoyed while growing up around the Great (and smaller) Lakes in the Midwest – except for the herb part, and the red part.  I had even caught a few of them myself when I was little more than a toddler (although somebody less squeamish dealt with the hooks and the worms).

The three images below describe several stages in the perch preparation, beginning with the unwrapped raw fillets lying on a plate, 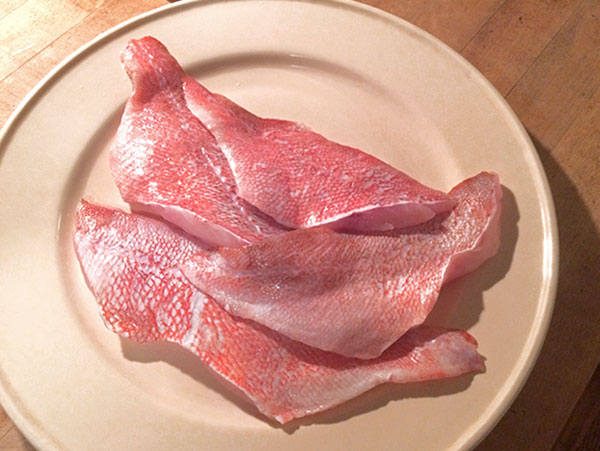 continuing with the fish marinating, 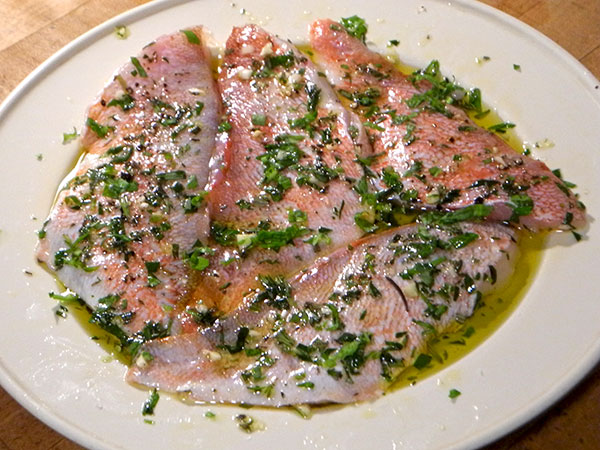 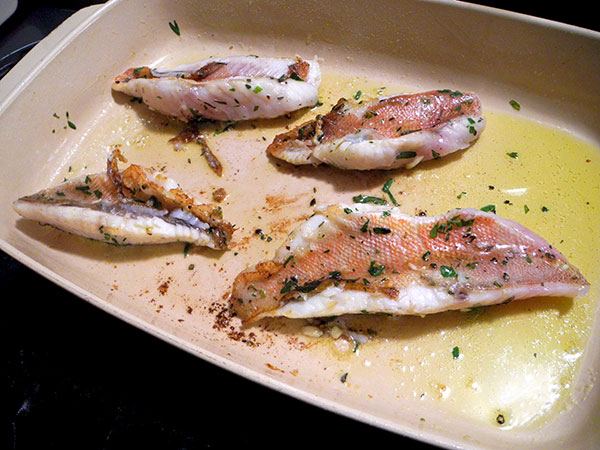