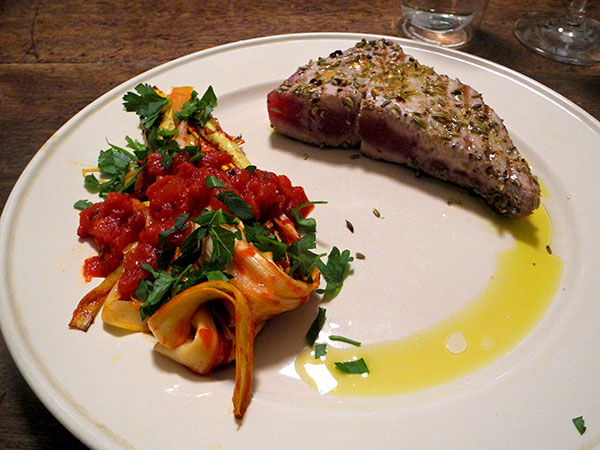 This simple tuna preparation has appeared on our table repeatedly, but the equally simple leek and tomato combination which accompanied it tonight, a modified version of an old Mark Bittman recipe, had never made an appearance before.  It turned out to be a standout, totally equal to the delicious tuna.

The two dishes are equally simple to put together, and demand surprisingly few ingredients, but there the similarity in preparation ends.  Because they are very different when it comes to the kind and amount of attention they need in the minutes before being put onto plates, they seem to be made for the cook who wishes to avoid being harried.  The tuna demands only about three minutes of cooking, but that has to happen just before it’s served;  the vegetables on the other hand can be assembled together leisurely and put into the oven an hour before (in fact they can be served merely warm rather than hot, guaranteeing there will be little last-minute stress for the cook).   The combination makes a great entrée to serve to a couple of guests.