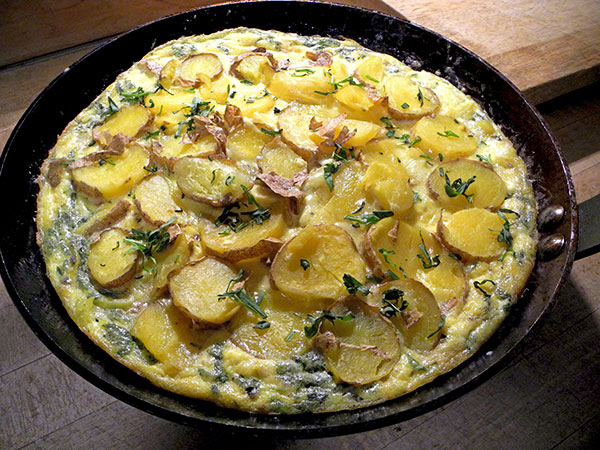 Yesterday I mistakenly described this meal as vegetarian, and potentially vegan (I’ve corrected the post), but I had completely forgotten about the half dozen little anchovies thrown in at the beginning of the process (a neglect which is the usual, almost sad fate of the glorious anchovy – in spite of its negative reputation with some – which is to make good things even better, ideally without being much noticed)

This dish is genuinely vegetarian, although it’s definitely not vegan.

Ah, the leek.  It seems that I’ve been building up to Saint David’s Day for weeks, although unwittingly. All those meals which boasted  baby or full-size versions of the Welsh national emblem now seem to have represented more than just gustatory delight.  It was only after I had decided this morning to sacrifice one more full-size allium sheath for our first meal of the day, and checked the date, that I remembered March 1, as the date of the 7th-century Welsh patron saint’s death, was a national feast day celebrated almost ever since.  By the way, while I was assembling this lunch Barry read to me the Wikipedia entry for the saintly monk;  I can say with some certainty that whatever his charms may have been otherwise, I would never have been seduced by his punishingly severe monastic rule, although it was one which I have to think was “More honor’d in the breach than the observance”.

The impetus for this morning’s search for a dish which would include at least one of the large leeks I still had in the crisper had been simply the desire to use my stock before we left for a short stay in Philadelphia, but we had a delicious lunch, and the recipe is definitely a keeper.