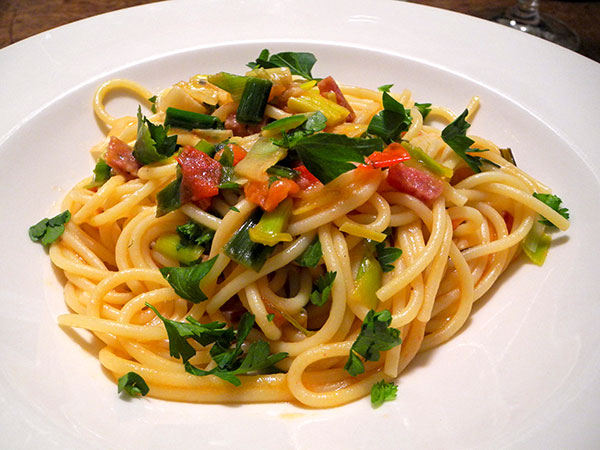 I used to cook pasta dishes far more often than I do now.  In fact I occasionally thought that we might be eating too much pasta, even when I had persuaded myself at the same time that might not even be possible (think Sophia Loren, as in, “Everything you see I owe to spaghetti”).  I cannot account for its more rare appearance on both our table and this blog in recent years, except that I think I’ve been hugely distracted by the diversity of the bounty available at our local farmers’ market, the incredible Union Square Greenmarket.

This particular meal managed to bridge both impulses, or fancies, since it includes both some rather precious, very-late-season leeks I had picked up in Union Square on Wednesday, and an eventuation of a slightly-modified version of a Mark Bittman pasta recipe I hadn’t even looked at in almost ten years.