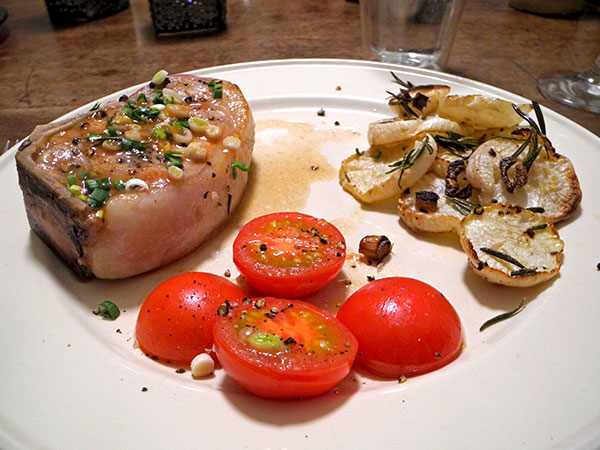 note: red objects in foreground are smaller than they appear

The chops were small, but just the right thickness for finishing in the oven. Their outer sides showed a layer of fat generous enough to help retain the juiciness promised by their width.  They were perfectly shaped, and I knew they would taste as good as they looked, because they were from Flying Pigs Farm.  I had purchased the frozen matched pair from the owner Michael Yezzi’s stand in the Union Square Greenmarket.  The turnips came home about the same time, from one of my favorite vegetable producers, Norwich Meadows Farm, also in the Greenmarket.  The slightly-outsized, exceedingly-red Maine ‘cocktail’ cherries have become something like my regular go-to tomatoes.  In the winter months I buy them regularly at Whole Foods Markets, although there are excellent Greenmarket sources for tomatoes, and I patronize them almost as often.  The herb and the alliums were each picked up in the Greenmarket some time since the beginning of February, and the fact that they were there this month is pretty shocking, even to me.

The meat was possibly even more delicious than the usual standard of the supplier and the very familiar recipe (from Rose Gray and Ruth Rogers’ “Italian Easy: Recipes from the London River Cafe“).  This time I used no herbs to finish the chops, only the baby leeks I’ve become attached to over the past weeks.  The turnips were as sweet as candy, but it was a savory sweet augmented by spring garlic and rosemary, with a bit of crunch on the edges, and succulent inside.