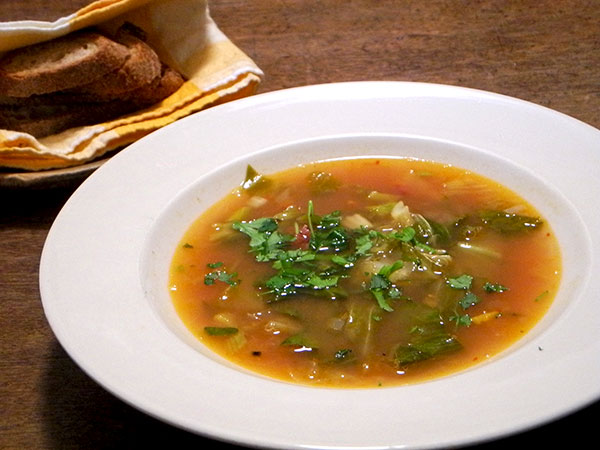 I’ve decided that soups are photogenic.

But here’s the background to this soup.

It wasn’t the recipe for Sauerkraut I had learned from Mimi Sheraton (and used for years), although I had worked with this new one before and been pleased by its speed, its simplicity – and its taste.  This time, when I prepared it on Thursday, I had to add enough water to bury two good-sized smoked pig knuckles in the Kraut.  I ended up with nearly a quart of extra, very aromatic juices which I didn’t need on the plates.  I poured it into a container and placed that in the refrigerator, thinking it might make a good winter soup base for a lunch in the next few days.

Today that’s exactly what it did – what I did.

Our lunches are really casual.   Most of the time (almost always) I don’t actually cook anything, and by the time either of us is hungry, there’s very little time for a fuss in any event.  I totally improvised this meal, and I worked fast.  The idea was to use some of the things, leftovers large and small, which I already had available, and which might not have found a purpose otherwise.

I started with the Sauerkraut-without-the-Sauerkraut, and added something over a cup of good beef broth.  I added the outside leaves of a white cabbage from Foragers, which I had boiled for three minutes or so, drained and cut as a chiffonade.  In addition, I added some small pieces of celery, from Migliorelli Farm, cut up and briefly sautéed; the heal of a spicy sopressata, almost minced, which had been leftover in the preparation of a frittata a few days ago; some rich, almost syrupy tomato juices left from a can of ‘Muti’ Baby Roma tomatoes, whose fruit had been used in a fennel-tomato compote nine days ago;  and, once in the bowls, I garnished the soup with the parsley, now chopped, which I had washed and dried for an entrée of whole fresh trout which had to be aborted two days after that dinner.

The soup was delicious; it was also surprisingly spicy.  The resulting rich color was a surprise.  I think the image above manages to describe the taste visually, if anything could.  I wish I could give it a name, but I’m unlikely ever to recreate it.

I served it with crusty, very delicious slices of what I believe was a Bien Cuit Miche, (which would be a blend of fermented rye and whole wheat flours), purchased today at Foragers Market.