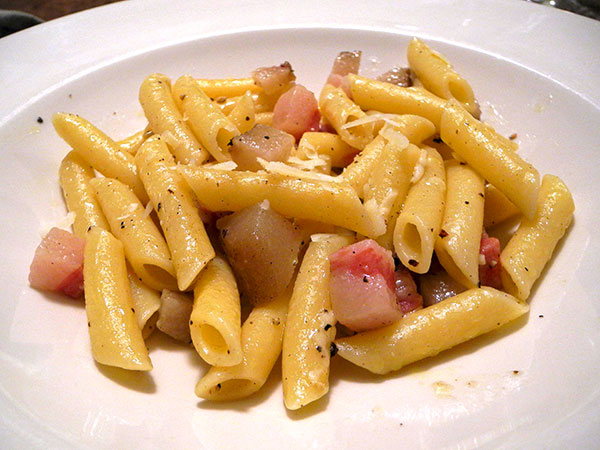 We never tire of this recipe .  It’s ‘La Gricia’, generally described as a traditional dish of the shepherds in the hills of Lazio, the province of which Rome is the center.   The name comes from the name of a valley which is no longer inhabited, perhaps by either sheep or shepherds.  I first came across this regional classic when the amazing inimitable Fred Plotkin once described it in the New York Times many years ago (in fact almost 26 years to the day before I prepared it last night).  In 1989, fascinated by its simplicity and apparent authenticity, I immediately cut the recipe out of the page and put it into my file, but I don’t think that I actually used it until years later, after we found ourselves dining at the Trastevere restaurant featured in Fred’s article.

That means that we first enjoyed it in 1996, in the form of Spaghetti alla Gricia, although we did not know its association with the clipping back at home, while sitting at a table in the little street outside Piccola Trattoria da Lucia.  We went back to the address in the Vicolo del Mattonato two days later, and at least once again the next time we were in Rome a year after that.  The founder, Lucia Antonangeli, had served ”la cucina de na vorta” [the cooking of once upon a time] at her eponymous trattoria from 1939 until she died in 1967.  Her grandson, Renato Bizzarri, who had himself succeeded his mother Silvana Cestier in running the restaurant, recognized us as soon as we sat down.  Now that’s a civilization!

Some time after we had returned to New York I found the old clipping in my ‘pasta’ file, amazed at the coincidence of our two encounters with La Gricia.  The recipe had come home to stay.

Since then the dish has become a standard – and a great favorite – in our own kitchen; I make sure that I always have the ingredients on hand, including, most essentially, a chunk of guanciale in the freezer.  If you don’t have access to guanciale, pancetta is almost as good, but it must be in chunk form.  I also prefer to use penne rigate, although a reasonably thick long pasta is probably just as correct, and perhaps as good, as the short, ridged form.