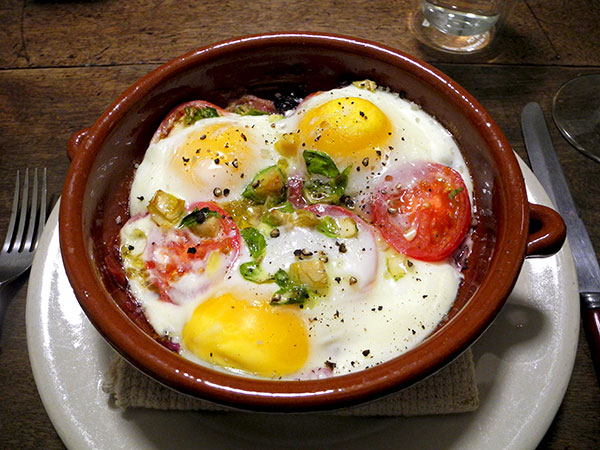 It was an off day, meaning it was neither a Greenmarket day (so no fresh fish) nor one on which I wanted to serve any significant amount of meat.  A simple vegetarian pasta dish would normally have been in order, but then I thought about the fresh eggs, perfectly ripe tomatoes, thinly-sliced prosciutto, and a bit of some very sweet kale which I had on hand, , so I looked around for a formula.

His 2007 recipe, “Baked Egg With Prosciutto and Tomato” became my starting point.  I had stashed the clipping in my ‘breakfast/lunch’ folder, but I had never used it, perhaps because it suggested only one egg for each portion.  I never totally forgot it however, even though I rarely actually cook breakfast, and seldom cook lunch;  by the time either of us is thinking of those meals, neither is willing to hold off hunger to wait for the prep.

But I love eggs, and I can appreciate them with any meal, so I took another look at the recipe and decided that adding two more eggs to the cazuelas would not corrupt it. Bittman’s text also suggested adding cooked spinach or asparagus to the bottom of each vessel;  I had some purple kale and was sure it would do just fine.

It made for a pretty decent dinner.   Breakfast or lunch even.