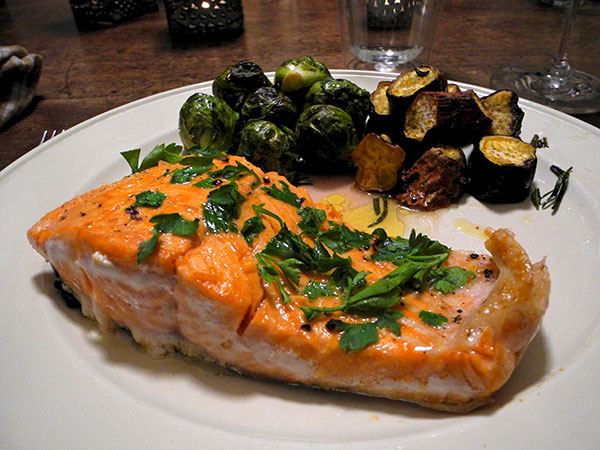 Late one afternoon, having earlier been unable to find a fish monger at the Greenmarket, I decided that I should start thinking about what I would prepare for dinner.  Fish has more and more become my first choice, and with familiarity with my sources and experience in cooking it I’ve become pretty fussy about where I buy it.  We both happen to love salmon, probably as much as any other fish, or shellfish (oysters definitely come first, but I don’t cook them).   Because of the availability throughout the week, normally, of six or so local fishermen at the Greenmarket, if I buy fish at the Whole Foods down the block, which I normally patronize only for staples, it’s always wild salmon from the Northwest, and almost always when it’s on sale.  I assume it’s been frozen at some time since leaving the water, but, even knowing what it tastes like in Oregon and Washington, I don’t think it’s lost anything in the process.

I bought salmon.  This was one of the best servings we’ve ever had at home, and it’s absurdly easy to prepare.

A word on the sweet potatoes (by the way, they would seem to be a natural as an accompaniment to salmon):  I found these particular small samples hanging in a darkened closet in a paper bag.  That is how I usually store sweet potatoes, but I had no memory or record in my trusty digital food log of their being there, or at least not still being there.  I think they had to be at least a year old. They had darkened and were so dessicated they now weighed almost nothing.  I was going to throw them out, but decided to give them a try.  They were phenomenal.  Note to self and all survivalists: I it ever becomes necessary to horde fresh, uncooked food in an emergency, without refrigeration and for an extended period of time, you could do a lot worse than choosing sweet potatoes.