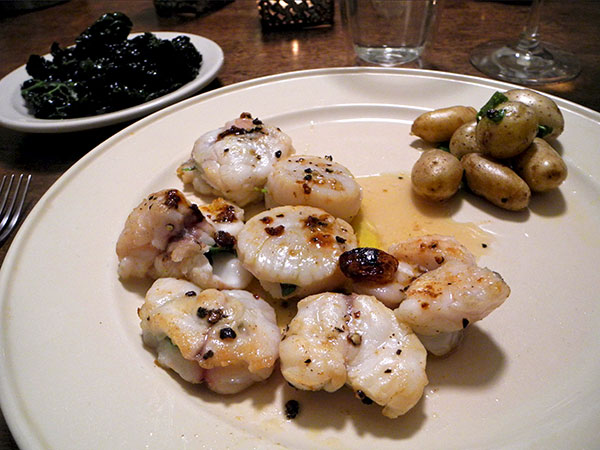 Although extremely tasty in the end, the seafood ingredients of this entrée were cobbled together somewhat from necessity:  When I arrived at the Greenmarket stall, the monkfish tails were all the same size, each a bit too small to be able to feed two, but too large to add a second.  I made the quick decision of buying four scallops in addition, thinking I would make them into a first course, or treat them quite separately before adding them to the plate of monkfish.

By the way, the total cost was still very reasonable, thanks to the moderate price the monkfish still commands.

When I finally got around to preparing the meal, fairly late in the evening, I panicked a bit, having forgotten until then the rough plan I had made earlier.  With little time to be very creative, and no time, really, for a meal which would stretch into two courses, I decided I could prepare both fish/shellfish varieties as one, using a simple, fast recipe, more or less that of Mark Bittman, which I had enjoyed in the past when I cooked each of them on their own.