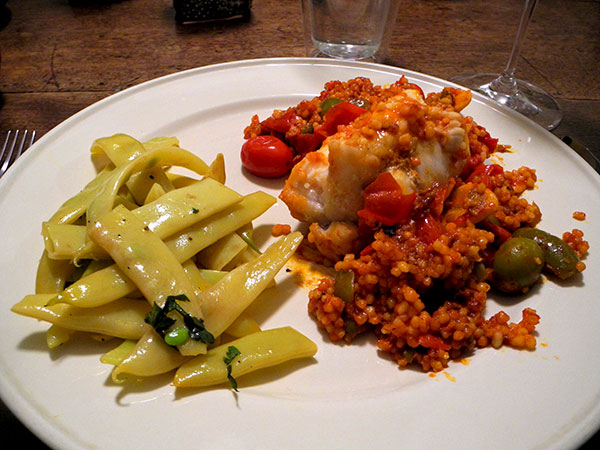 Everything was really, really good.  I think it was largely because of the fresh, local and unadulterated ingredients.  Also, as with the sea bass fillet in the last post, this entrée could be described as a “a good date dinner”, if for a slightly different reason.  Here it was because the simple steps in its preparation demand very little attention.

I’ve prepared this dish twice, and Barry and I both want to savor it more often.   Aside from serving as a platform and seasoning for the monkfish, I can imagine the braised couscous and vegetables working with other fish or crustaceans (maybe lobster tails?), or as a side to fish or meat quickly (or slowly, lazily) prepared separately.

Couscous is Italian? Yes, and very traditional in Sicily, where, like so much else we love about its food, it began with the Saracens.

Note: After I tripped the shutter (do digital cameras actually have a ‘shutter’?) for the image above, I scattered some more chopped lovage onto the beans, so imagine there’s more green in that area of the picture.