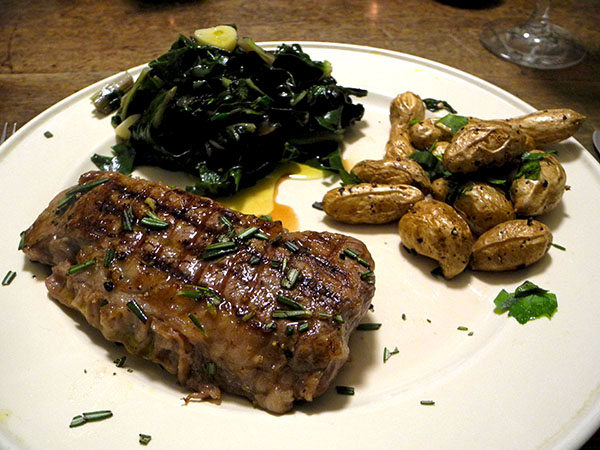 The little steaks were tri-tips, already one of the most flavorful of beef cuts. These 2 were 100% grass-fed, apparently a very important distinction for many people, but one which I have not yet been able to fully grasp. I do know that they were delicious, possibly more ‘meaty’ than most we’ve had in the past, may have been more lean than we would normally have expected, and they seemed to take a bit less time to cook (ending up very slightly less rare than we would normally prefer, but definitely not a disappointment).

The diminutive size of the potatoes didn’t suggest to me they’d have much sophistication, but they turned out to be really tasty. Some of their personality may have been stimulated by the 2 forms of dried habanada pepper with the seasoned olive oil and rosemary leaves in which they were tossed before they went into the oven.

The chard was amazingly sweet and absolutely delicious. I had tasted it raw at the farmer’s stand, so I know it would have been terrific even if I hadn’t added other elements to the dish.

Maybe because the weather seemed to have finally turned (as I type this the next day, the birds are chattering like crazy outside my open window), we had a frozen dessert, probably for the first time since last summer.