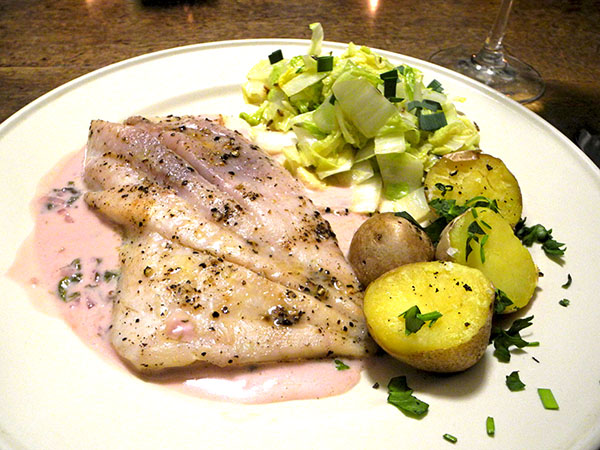 We ate in a modest Paris bistro last night.

The trip started when I spotted John Dory at the Greenmarket, earlier in the day. 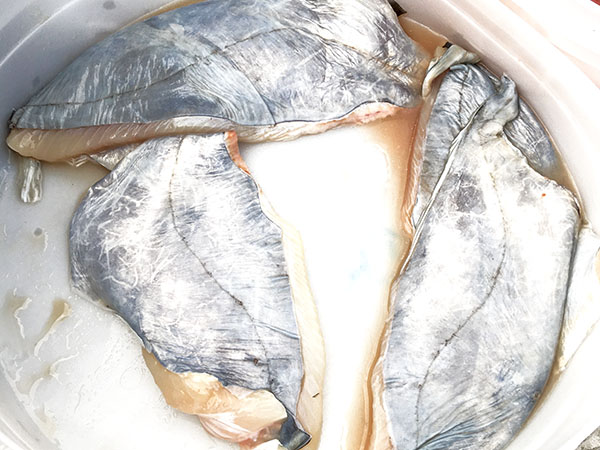 After selecting 2 of the fillets in that picture, I turned around to find that another stall was displaying the last of its farmer’s ‘bouquets’ of beautiful red sorrel, very much alive, their roots still intact. Minutes later, remembering that I had some boiling potatoes at home and also one small Napa cabbage. I had already composed a meal which gradually looked more and more French, but it was only when we had sat down to it that I realized we were inside a French bistro, about to enjoy Filets de St-Pierre à l’oseille.

In between, the kitchen had managed to look more serious than usual, with a number of pans in the fire at the same time.

The cabbage is in the large deep pot; the scallions and fennel seed in the small copper skillet in front of it; the sorrel sauce was being prepared in the deeper copper pan to the top right; the potatoes were boiling in the clear glass antique Pyrex pan; the small early-19th-century enameled cast iron porringer on the electric hot plate was melting butter in which the fillets would soon be dipped, inside the shallow white bowl on the far right; and at this moment that bowl was resting on top of the glazed ceramic baking pan in which they were shortly to be roasted. The fish is waiting out of the camera frame, on the counter to the right of the stove and the sink.

Note: I would never have been able to juggle this kitchen army only a few years ago, but practice makes courage.

This is a picture of the John Dory fillets as they emerged from the oven.

Fortunately this fish is a little firmer than some, because I had already placed the John Dory on the 2 plates before I realized that, to do it properly, it should rest on a pool of sauce. This meant that I now had to arrange the sauce to the right of each fillet, then gingerly lift the fish – turn it 180 degrees (to achieve a relatively aesthetic posture) – and bring it back down on top of its condiment.

The vegetables then followed. They were easy.