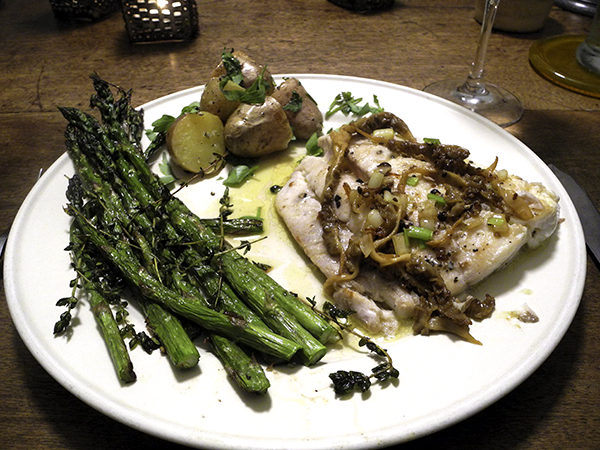 I’m new to cooking with morels (who isn’t, other than the lucky few who can hunt them in nearby fields?); I think I still have work to do on these prized and very expensive fungi, assuming I save up enough for another go: Maybe I’m too allied to Mediterranean cookery, but while this approach with a flounder fillet that I employed last night was delicious, it didn’t seem like an ideal match. 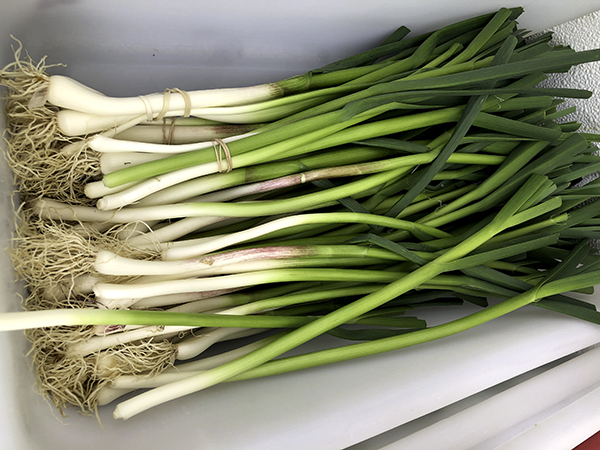 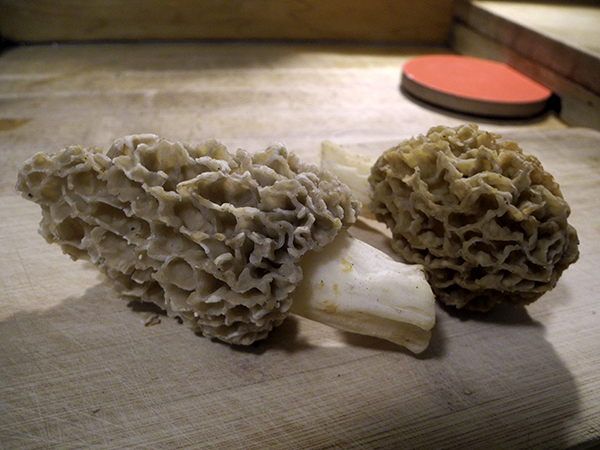 It had started at this pretty spectacular table of foraged mushrooms and ramps, or wild spring leeks, at the Union Square Greenmarket(note: the beautiful eggs weren’t foraged). 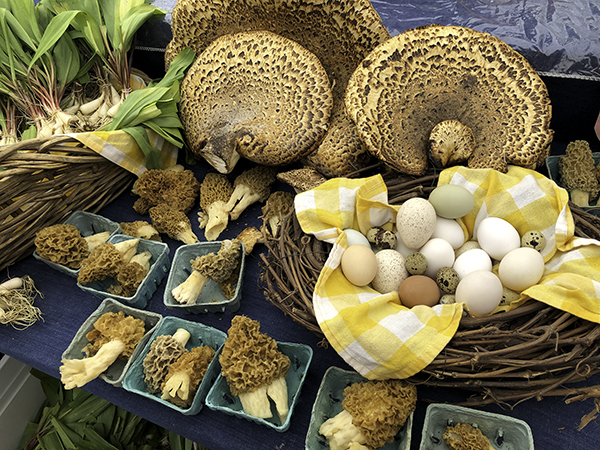 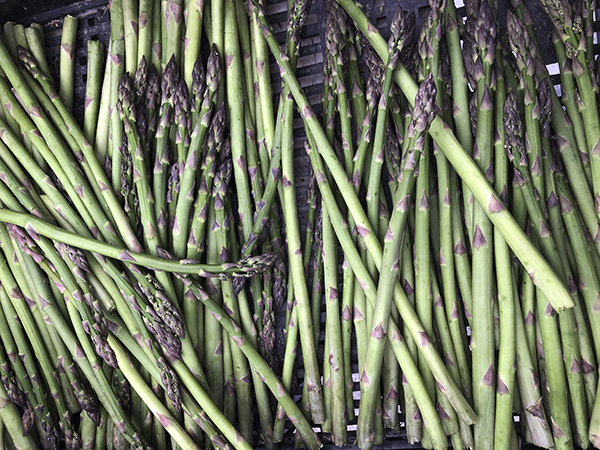 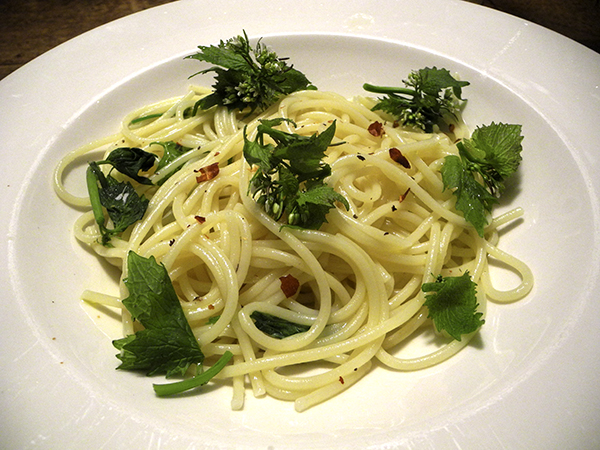 We had been to the theater, a stunning performance of Sam Shepard’s ‘Curse of the Starving Class’, and, both stimulated and disturbed, we’d decided to head for the comfort of our home table rather than eat out (food, and eating both feature large in the play).

We didn’t arrive home until about 10:30. Dinner would have to be assembled quickly, but I wanted it to be very satisfying, so it was ‘two bachelors pasta’ to the rescue (my appellation, my improvisation, with a nod to any number of variations on ‘spaghettata di mezzanotte‘).

I put water in the pot and set it above a high flame as soon as we got into the apartment; the rest of the cooking operation was almost as easy. 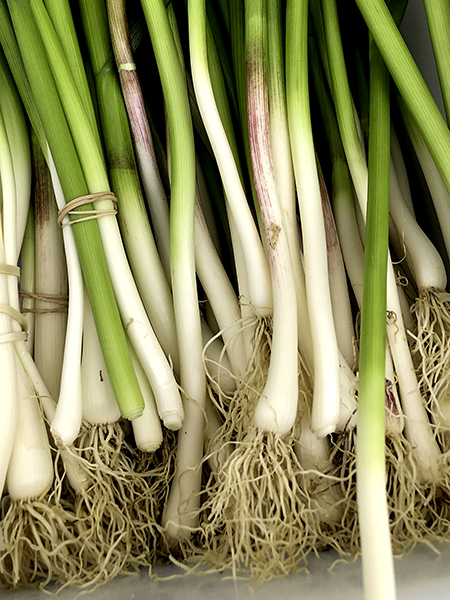 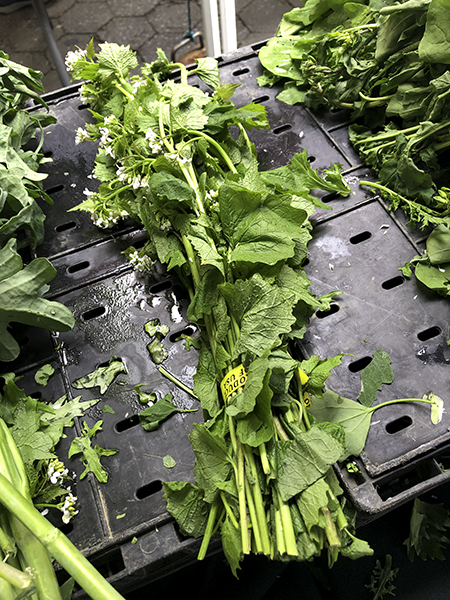 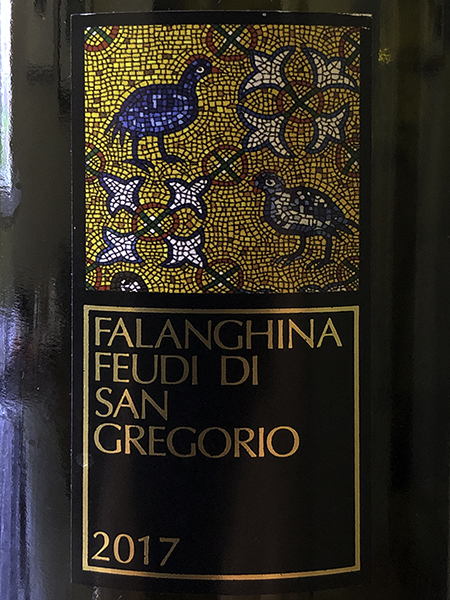 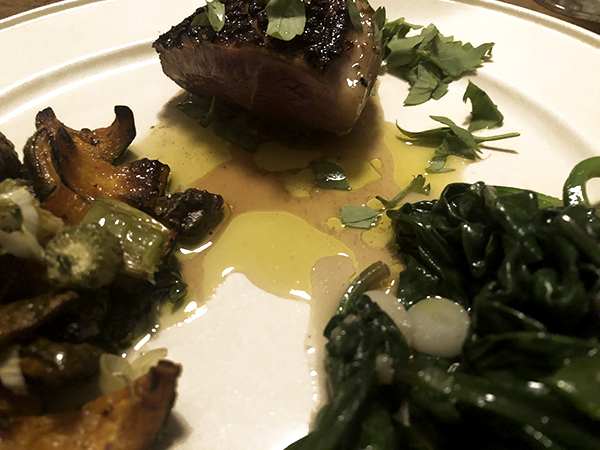 While the photograph above is my favorite image of this meal, this one may really describe it better: 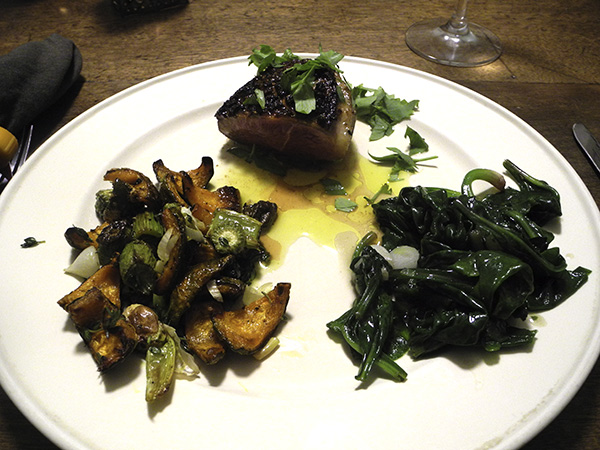 On Monday afternoon, the same day I had picked up the swordfish belly that I prepared that night, I had also bought one fresh duck breast. At the time I was thinking of it as a small ‘speculative’ investment: Because we had enjoyed a meal of meat only a few days before, it was unlikely that we we’d be eating more soon. I thought I’d freeze it until an occasion presented itself, but before I did, it was Tuesday, and the occasion had arrived.

It was the cool weather, but mostly it was the vegetables.

I had suddenly remembered that I had a couple of small yummy-type squash in the refrigerator, which, together with some luscious spinach I had bought the day before, almost demanded something like duck.

Forgotten however, since they had been there almost a month, was the just how small these kabocha squash actually were (they were the runts of the bucket, and the last 2 cleft in the farmer’s stall, which is pretty much why I had bought them), especially since they had become just a little desiccated over that time, and I still had to hollow out and remove the seeds and stringy pulp. I realized the inadequacy of their size only once I had begun preparing dinner, so necessity was the mother of inspiration. They had almost disappeared, but I still had sufficient warning of the problem, and I managed to find a small supporting cast: I added a little celery and a few small very spicy radishes, roughly chopped, then continued, improvising a bit, with a recipe I would have used if it had been the squash alone that I was cooking.

It was delicious, more than just a good complement to the duck and the spinach.

The spinach cooked down fast, seemed to be trying to disappear, but I put a brake on it just before it did, and its sweetness made up for the smallness of its final portion.

The duck itself was pretty small, but it’s a very intense, sturdy meat; it came with no surprises, presented absolutely no difficulties; it helps that I could almost do this recipe in my sleep; and it was superb, as always. 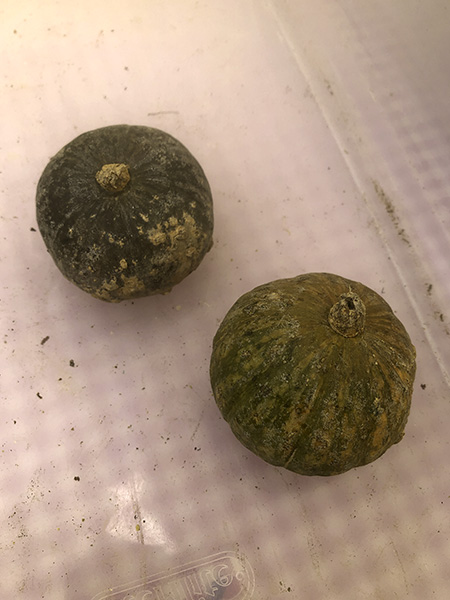 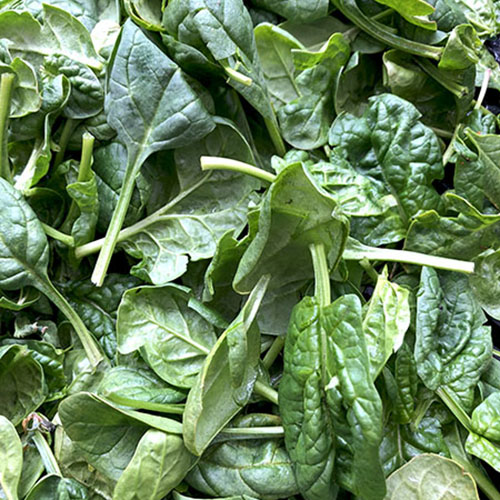 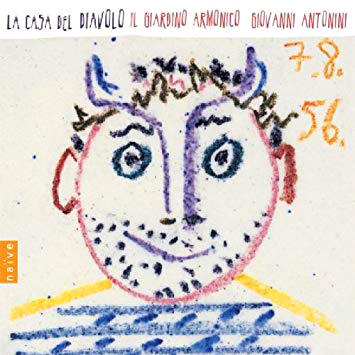 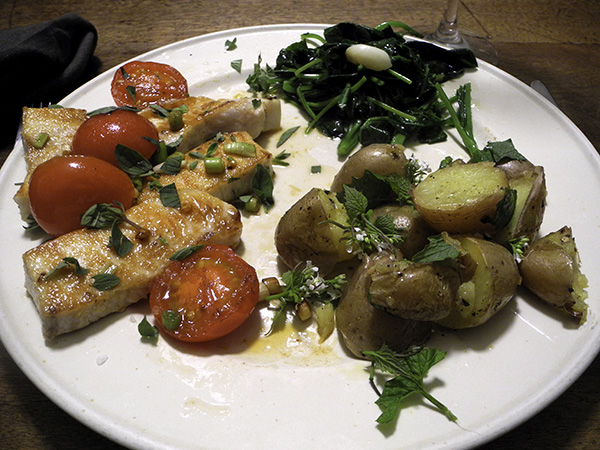 It’s swordfish belly, and, inexplicably it’s still almost invisible on the internet. This is the second time I’ve prepared it at home, improvising a separate recipe each time. This one seemed even better than the first one.

What it’s also not, is swordfish ‘bacon’, so just ignore the people describing it that way:  It won’t help in its cooking or its enjoyment.

Another factoid: The word “garlic” appears in the description of each of the 3 segments of this meal, although in one case there is no actual garlic and none of them resembles any of the others.

More interesting is the meal’s locavore slant: Although there had once been an even more local sea salt available here, the enterprise called Urban Sproule (it seems to have now disappeared), with its remarkable product drawn from neighbor Brooklyn, last night was the first time I ever blesssed a meal with a local salt; it was also one of a relatively few number of meals posted here that have featured a local citrus fruit. I’m now looking forward to the next breakthrough: local black pepper and local olive oil (just kidding).

Finally, this meal was more of a collaborative than most, as it was assembled largely through exchanges between Barry and myself (I must have felt more tentative than usual in the kitchen last night). 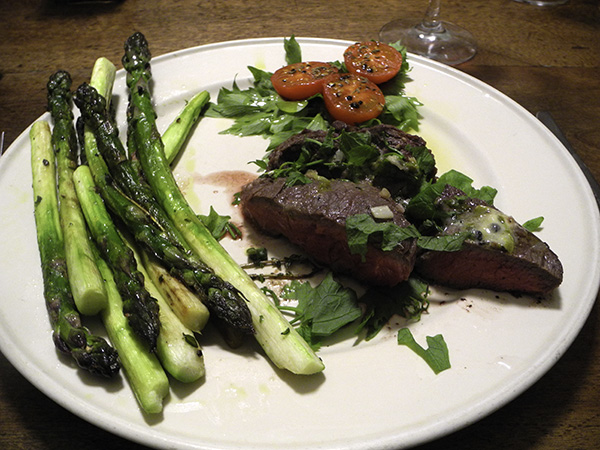 Buffalo is leaner than beef, and so it needs less time and lower heat on the grill pan. Also, the color is and remains a lot redder than beef, so when it looks like an almost rare beef steak buffalo is actually medium-rare.

Then there was the fact that chuck steak, while really delicious, can be pretty tough if not cooked properly, and knowing what that means is key. I’m definitely not an expert, but I do know that the chuck comes from the large muscles of the shoulder, which do a lot of work, meaning they have a lot of connective tissue. This means that normally these cuts do best with slow, moist heat, like braising in the oven, or, if steaks, with a very quick cooking, like broiling, pan-frying, or pan-grilling.

It was a warm and humid evening, so I had decided against doing a reverse sear, which would seem to have been another possibility.

In the end, perhaps too optimistically, I chose to treat it more or less as I would usually cook a steak. That by itself may not have been a mistake, but I think I did make a mistake in not slicing it into sections once it had been cooked, to at least suggest a tenderness it was not expected to possess, but also for an aesthetic reason, since the steak, while delicious, did look just a little irregular on the plates. 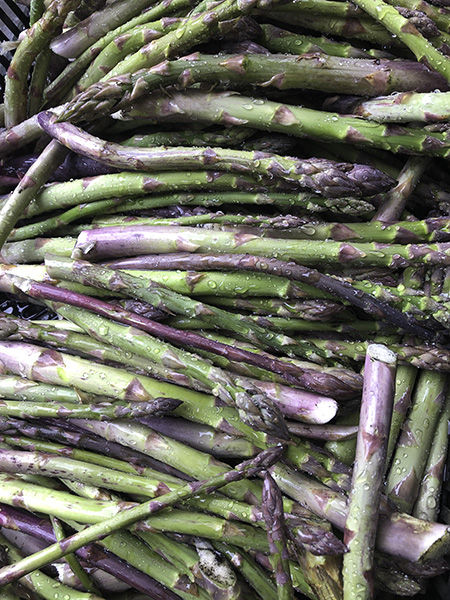 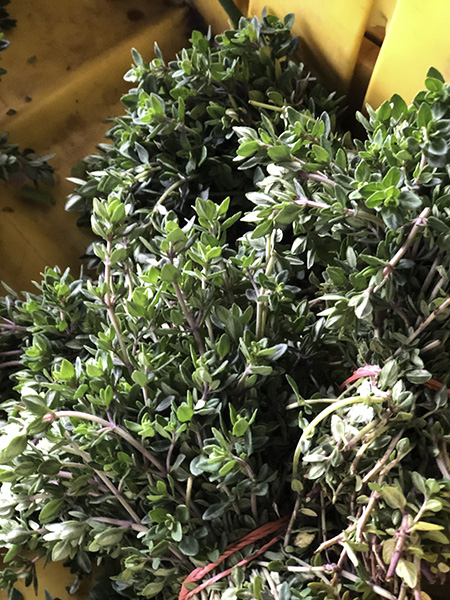 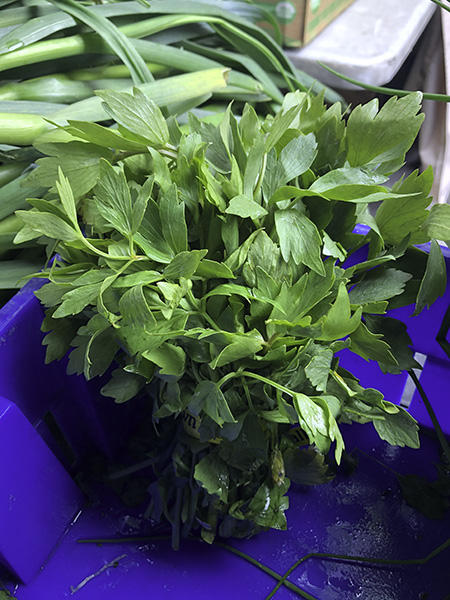