Some time last evening, after getting other busyness and tasks out of the way, I turned to that of preparing a dinner using the four whole Whiting I had brought back from the Union Square Greenmarket that afternoon.  I soon realized that I had been wrong in thinking that I already had on hand a number of good recipes for this fish, so I started ferreting around on line.  Considering the time I now had left to put something together, and the ingredients I actually had on hand (which meant, like the Greenmarket itself these days, a very limited selection of fresh vegetables that couldn’t be described as ‘roots’), I was coming up with nothing.   None looked both workable and interesting, except for one that I had transcribed a few years ago, none looked both workable and interesting.  That recipe still sat, a single sheet of paper, entirely alone, in my “Whiting’ folder.  On it were the notations, “good…but burnt (use more liquids and/or cook the vegetables less)”.

I did a search on this blog to learn more, but found nothing.  I began to doubt that I had actually used the recipe, but when I began to compose this post, searching under key words, to find the source, I found this, my own tweet, with an image of a meal from last April; it was almost the same as the one we had last night.  Last spring it had gone no further than a tweet, so I may have been in a hurry.  It might also have been because of some charring, but there doesn’t seem to be any visible in the picture, and I think that plate actually looks better, or at least more aesthetic, than last night’s.

It was good.  I wouldn’t say that it was a great preparation, this time at least, but I was unable to include fennel yesterday, and that would have made a significant difference.  I was also rushing.  I’m thinking I really should have a fennel bulb around the next time I do this recipe, and that I will try to include the optional clams (my fish mongers always ask, “what else?”, after they’ve put my purchase in a bag, and I can almost never follow through with another order).

I did use more liquids this time, introducing both more vegetable broth and white wine throughout the baking process.

Today I located another baked whole whiting recipe, so these delicious fish are likely to be back on our table, either with or without heads (theirs). 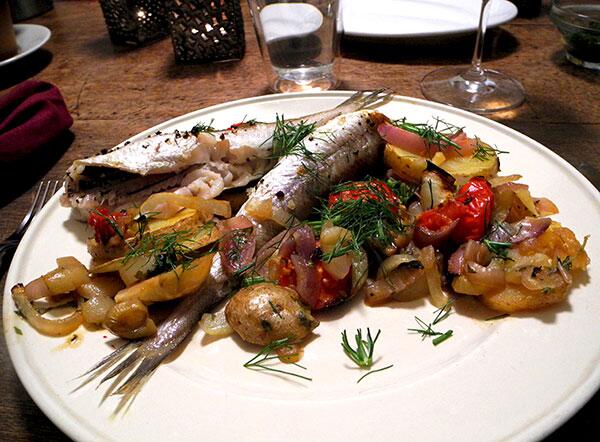 with fennel the last time, but no heads